What Is a Driver?

The Windows kernel is not designed to interact with devices by itself. It depends on device drivers to detect attached devices, mediate communication between the device and the Windows kernel, and expose the device's capabilities to clients such as applications. Windows provides an abstract device support interface called a driver model. The job of driver developers is to provide an implementation of that interface to support the specific requirements of their device.

In more practical terms, the usual purpose of a driver is to handle communication between applications and a device. In many ways, drivers operate much like services. For example, drivers:

Drivers are different from services in several important ways. They:

This chapter provides a conceptual description of how drivers fit into the Windows operating system and how they manage the flow of requests between clients and devices. Although this book is about WDF, the focus of this chapter is primarily the older WDM, which is based on a DDI exposed directly by the Windows kernel. WDM provides great flexibility, but software developers have found implementing drivers with WDM to be a challenging task. However, it is important to have at least a basic understanding of WDM:

To understand how drivers work, the best place to start is to examine how drivers fit into the core Windows operating system. The Windows system architecture consists of a number of layers, with applications at the top and hardware at the bottom. Figure 2-1 is a simplified architectural diagram of Windows, showing how drivers integrate into the overall architecture. The key components are described following this diagram. 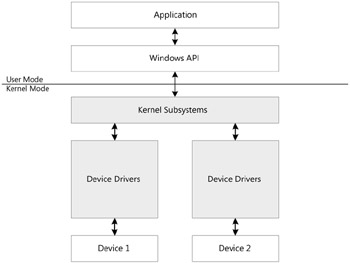 Applications and the Windows API

Kernel subsystems handle much of the core Windows functionality. They expose the DDI routines that allow drivers to interact with the system. Drivers interact most frequently with the following subsystems:

Other kernel subsystems that expose DDI routines include the memory manager and the process and thread manager. Although the kernel subsystems are separate components, complex dependencies exist between them. For example, the PnP manager's behavior depends on the power state and vice versa.

Device Objects and the Device Stack

When a kernel subsystem sends an I/O request to a device, one or more drivers process the request. Each driver has an associated device object to represent the driver's participation in the processing of I/O requests for that device. The device object is a data structure that includes pointers to the driver's dispatch functions, which allow the I/O manager to communicate with the driver.

The example in Figure 2-2 shows two devices-each with its own device stack-that are serviced by a single set of drivers. 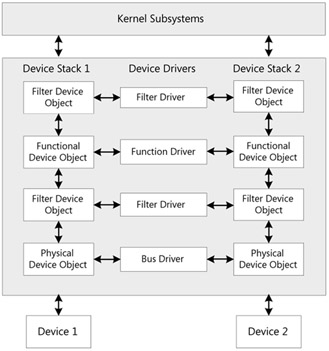 A device stack is constructed from the following components:

The three types of device objects differ in detail, but they work in much the same way to allow the system to process I/O requests. See "Kernel Objects and Data Structures" and "The Windows I/O Model" later in this chapter for a discussion about how a device stack handles I/O requests.

Systems usually have several levels of buses. The lowest level bus can have one or more buses attached to it, as well as stand-alone devices. Those buses can, in turn, have buses and standalone devices attached to them, and so on. Most bus drivers therefore must serve two roles: as a function driver for the underlying bus and as an enumerator and manager for any attached devices.

During system startup, the PnP manager starts with the lowest level bus and does the following:

The result of this process is represented by a hierarchical structure called the device tree. Windows represents each device stack by a node in the tree called a devnode. The PnP manager uses a device's devnode to store configuration information and to track the device. The base of the tree is an abstract device called the root device. 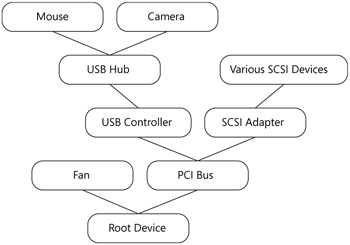