Chapter 16: Getting Your Project Back on Track 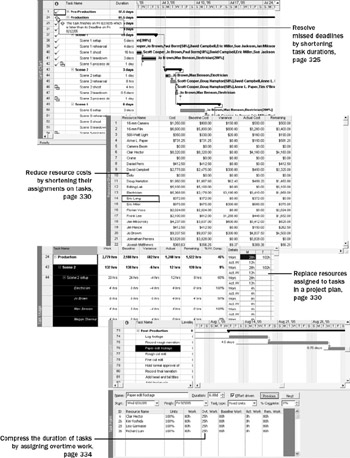 After work has started on a project, addressing variance is not a one-time event. Instead it is an ongoing effort by the project manager. The specific way you should respond to variance depends on the type of variance and the nature of the project. In this chapter, we’ll focus on some of the many variance problems that can arise during a project as work progresses. We’ll frame these problems around the project triangle described in detail in Appendix A, “A Short Course in Project Management.” 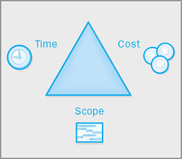 In short, the project triangle model frames a project in terms of the time (or duration), cost (or budget), and scope (the project work required to produce a satisfactory deliverable). In virtually any project of any complexity, one of these factors will be more important than the other two. The most important factor is sometimes called the driving constraint because meeting it drives your actions as a project manager. For example, for a project that must be concluded by a specific date, you might have to make cost and scope compromises to meet the deadline. Working with the project triangle gives you a good way to think about the trade-offs that nearly always must be made in projects. Just as importantly, it gives you a clear way of explaining the pros and cons of trade-offs to the project’s resources, sponsors, and other stakeholders.

In the project triangle model, time, cost, and scope are interconnected; changing one element can affect the other two. However, for purposes of identifying, analyzing, and addressing problems in project management, it’s useful to fit problems into one of these three categories.

The specific issues we’ll focus on in this chapter aren’t necessarily the most common problems you’ll face in your own projects. Because every project is unique, there’s no way to anticipate what you’ll run into. However, we’ve attempted to highlight the most pressing issues at the midpoint of the short film project’s duration and to apply solutions to many common problems. Note that some of the features you’ll use in this chapter you might also use when planning a project. Here, however, your intent is different—getting the project plan back on track.

The deadline dates and project baseline will help you troubleshoot time and schedule problems in Microsoft Office Project 2003. In this exercise, you address the missed deadline for the production phase of the short film project and shorten the durations of some tasks on the critical path.

With the updated setup and teardown durations, the overall duration of the production phase now ends on August 11, just one day before its deadline. Given the amount of variance that occurred in the production phase already, however, you should keep a close watch on this phase as work progresses.