Speak From a Strong Point of View

Your content will be more powerful if you introduce it with a strong and unique point of view. Brad describes how this works with one of the best presentations he has ever seen.

Brad: Master Presenter, author, and past president of the American Psychological Association, Martin Seligman, started his presentation by saying that he was once interviewed by CNN about the current state of psychology in the world. Martin was only given one word to state his answer, to which he responded by saying, "Good." Because this was not much of a sound bite, the reporter said he could have two words, and Martin said, "Not good." The CNN reporter wasn't happy with this sound bite either, so he said he could have three words, and Martin answered, "Not good enough."

Martin then went on to do a brilliant job of explaining the characteristics of people who lead A Pleasant Life, A Good Life, and A Meaningful Life. A Pleasant Life consists of having pleasant experiences such as sharing an excellent meal with a good friend. A Good Life consists of using one's signature strengths. A Meaningful Life consists of using one's "signature strengths and virtues in the service of something much larger than you are."[1] He then told the participants, who were sitting on the edge of their seats, that we can have a Full Life, which consists of a pleasant, good and meaningful life.

I don't know if I have ever seen a presentation with more breadth and depth and at the same time content that was truly universal and deeply personal.

You can get a sense of Martin's ability to convey information from this strong and unique point of view, and take a test to determine and develop your own signature strengths, in his book Authentic Happiness or by visiting his Website http://www.authentichappiness.org.

You can also make your content powerful by asking a thought-provoking, rhetorical question that gets the participants thinking right at the outset of your presentation. For example David Ropeik, Director of Risk Communications at the Harvard Center for Risk Analysis, starts his presentation by asking the participants to make a series of choices about the perceived risk associated with various activities by taking the risk quiz in Figure 2-1. 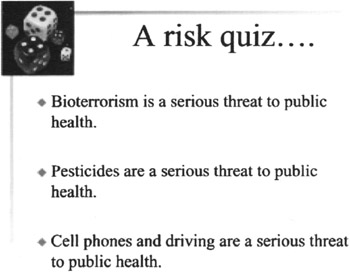 Most of the people who responded to the quiz thought that the chances of risk were higher from the external factors, when in fact they were higher from the respondents' own actions. In other words, the risk that any one person will have an accident or die while using his or her cell phone while driving is significantly higher than the risk associated with bioterrorism or pesticides. David used the quiz to get the audience thinking about how they assessed risk and benefits of activities more objectively and how to take appropriate corrective action.

Stephen Lewis has held the offices of the Canadian Ambassador to the United Nations, special adviser to the U.N. Secretary General of Africa, Assistant Secretary General with UNICEF, and is the Secretary General's Special Envoy for HIV/AIDS in Africa. Mr. Lewis is a world-renowned orator who presents using words of eloquence on behalf of making the world, especially Africa, a better place.

Mr. Lewis presented the closing keynote address to the Congress of Canadian Student Associations. This association is for university and college student leaders from across Canada. The speech took place on a Sunday evening; the keynote was scheduled to take place after the closing dinner at which point there would be an open bar and a dance. To make matters even more challenging, many of the student leaders had partied as only college and university students can on the Saturday night before. Yet when Stephen Lewis spoke, he captured their total attention for the entire length of his keynote address. His passion for his cause is nothing short of remarkable.

As a presenter, Stephen Lewis is also nothing short of a provocateur. After telling us of his first-hand experience in seeing the ravages of HIV/AIDS on the African continent, he pointed out that only a fraction of the money that was spent on arms or the 2003 Iraqi war could completely eradicate the HIV/AIDS pandemic in Africa.

He then stunned the audience by saying that gender inequality may be an even bigger worldwide problem than HIV/AIDS. Stephen spoke eloquently about women who are refused education just because they were born female; about baby girls killed in China just because they were born female; and women who, against their will, were raped and subsequently stoned because "they committed adultery" in Central America.

It is almost impossible to hear this impassioned, eloquent man speak and not want to help make the world a better place. Stephen always speaks from a strong point of view and earns the utmost respect of those who agree with him as well as those who don't.

In sum, Martin Seligman, David Ropeik, and Stephen Lewis all have mastered the craft of developing dynamic content by speaking from a strong and compelling point of view.

Please write down three specific things you could do to develop your own strong and compelling point of view.

"You have to know your message and where it is going. Many speakers don't know their message strongly, clearly and concisely enough and that is the main reason why the audience can't follow it."

One sure-fire way to make sure you do know your message strongly, clearly, and concisely enough is to use the business card test. The business card test evaluates if you are able to write the central thesis of your presentation on the back of a business card. If you can do this, you'll go a long way towards developing a strong point of view, and you will be off to a great beginning.

My point of view is

The Exceptional Presenter: A Proven Formula to Open Up and Own the Room

Confessions of a Public Speaker (English and English Edition)