By this point we've examined all aspects of printing in Terminal Server environments related to out-of-the-box tools and techniques. However, even considering everything we've seen so far, troubling issues can still arise, including:

Fortunately, several third-party software printing solutions are available to address these issues. The four most popular vendors now, in alphabetical order are:

Because there are drawbacks to Terminal Server's out-of-the-box printing solutions, and because third-party tools are so popular, it's worth considering them. As for recommendations, we'll study the printing challenges and how third-party tools are used to address them from a technical standpoint. We will not analyze each vendors' products and provide reviews. (Product review information is available online at www.brianmadden.com.)

After reading this section, you'll have a true understanding of why these products are needed and how they can help, enabling you to explore the different printing vendors and accurately assess their offerings. All four vendors named here offer 30-day trial versions of their products. You can find a complete list of links with more information in the Appendix.

The technical design information provided here together with the online information about these four vendors should provide you with enough information to decide how to support the printing challenges that arise in your environment.

The printing software tools of the above-named vendors can be divided into two groups:

At first glance, it may seem that the two descriptions are the same. Products from each group differ in how they solve printing challenges.

The universal print driver products from EOL, Qnetix, and Citrix allow you to install a single "universal" print driver on your Terminal Server that is then used for every printer. (This driver does not, however, work with specialty printers such as vector plotters, label printers, and barcode printers.)

When a user prints, the Terminal Server's print subsystem uses the universal driver to render the print job into either a PDF file or PCL file (depending on the product). Then, the print job is transmitted to the client device where the local printing subsystem forwards it to the appropriate print queue. This entire process is laid out in Figure 8.7. 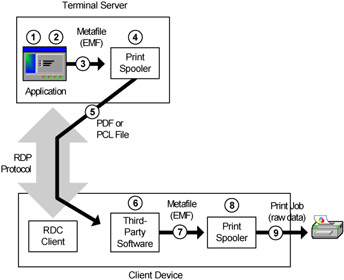 Both triCerat ScrewDrivers and ThinPrint install a simulated print driver on the server that receives print data from the GDI. This approach is similar to that of UPD-based products. However, unlike those products, these EMF-based products do not render the print job on the server. Instead, they send the device-independent EMF file to the client device. From there, triCerat or ThinPrint client software forwards the EMF print data to the client's print subsystem. The client device renders the print job and sends it to the appropriate printer. Figure 8.8 illustrates this process. 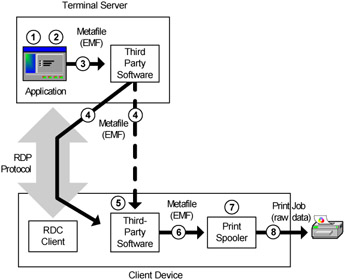 Often, Terminal Server environments are designed so that the users are at one location and the Terminal Servers are at another location. This design is preferred in many cases because it's desirable to place the Terminal Servers close to the data sources, usually located at corporate offices. One problem with this architecture is printing. Typically, the location that houses the users has its own print server, as is often the case with remote offices or factory floors, shown in Figure 8.9. 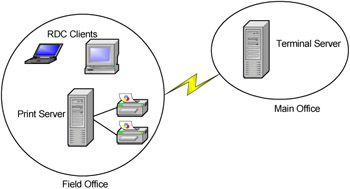 The problem with this design is that the WAN is not used efficiently. If client printers are used (see again Figure 8.5), the Terminal Server will spool the entire print job before it's sent across the WAN. Alternately, the printer could be configured as a server printer (see again Figure 8.3). However, with this configuration, the print job would still be spooled on the Terminal Server. Either way, inefficient print traffic is sent across the WAN.

The third-party tools outlined previously offer some relief in this scenario as well. The UPD-based tools send the PDF or PCL data to the client, and the client then invokes its local print subsystem and prints the document as normal.

The EMF-based solutions send the compressed EMF data to the client, where (again) the client invokes its local print subsystem and prints the document as normal.

The exact implementation of this process depends on the vendor. UPD-based vendors such as EOL and Qnetix have solutions by which they can send PDF files directly to print servers, and ThinPrint can send EMF print data directly to the print server.