Dina's Gourmet has decided to implement Windows 2003 Terminal Servers to provide several core applications for their users. They have 13 office locations and about 950 users. At this point, the project team has taken an inventory of their locations and users. Based on inventory findings, they were able to put together the basic design of their Terminal Server environment. Now all they need to do is figure out how to print. The project team decided that it would be easiest to create a solution based on the type of printing scenario. In looking at their Terminal Server system design, they realized that there were basically four different printing scenarios:

In addition to identifying the different printing scenarios, the project team also created a list of business goals for their Terminal Server printing environment. These goals included the following:

Keeping these three printing goals in mind, the project team decided to address each printing scenario separately, beginning with the main office.

At the main office, users' printers are automatically mapped via their logon scripts. Because the project team wanted the users to have the same environment when they logged onto a Terminal Server as when they logged onto their local workstation, the users will run their standard logon scripts (except for the virus update section which does not run if it detects that the user is logging on from a Terminal Server). Because the printers are configured via logon scripts, there will be no issues configuring printers for different users.

There was only one issue with the network printers at the main office that the project team had to address. That issue dealt with printer drivers and the drivers that need to be installed onto the Terminal Servers. Some project team members wanted to install all of the drivers for all of the printers; other team members thought that only basic, generic drivers should be installed. To fully understand the difference of opinion, let's probe deeper into this issue.

Dina Gourmet has eight different types of network printers in their main office. Three-quarters of these are HP LaserJets. The rest are more specialized, such as color printers and dot-matrix printers for multipart forms. Some project team members felt that all of the LaserJet printers should use the same driver, most likely a LaserJet 4 driver. While they might lose some functionality of the more advanced printers, they would not have to support very many drivers.

Other team members felt that they could easily support eight different printer drivers. They pointed out that because these were all network printers, there was no chance that non-supported printers would ever be used. There was no risk that they would ultimately have to support hundreds of printer drivers.

In the end, this driver issue was escalated all the way up to the CTO. His vision was pretty compelling. He said, "We have already spent a lot of money on fancy printers that can duplex, collate, staple and bind. With our vision of moving everything to a server-based computing model, it seems that Terminal Server will be a key part of our infrastructure for the next few years. For that reason, we should do everything we can to ensure that we are able to realize the full benefits of our printers in the Terminal Server environment."

With that, the project team decided to install all of the native printer drivers on their Windows 2003 Terminal Servers. 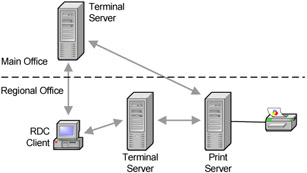 For the most part, printing in the regional offices mirror the main office, with users receiving their printer mappings via logon scripts. The users running RDP sessions on local Terminal Servers will have extremely fast and reliable access to the printers.

The only issue here relates to those users who need to print from applications running on the Terminal Servers located back in the main office. In order to figure out how printing should be configured for them, the project team conducted an interview in order to create a "printer user's profile." Their questionnaire addressed all printing information that the project team would require to determine the type of printer support needed.

The following questions were asked of users to create the printer user's profile:

In addition to surveying individual users, the project team also chose to look at the printers that they used and to collect the following information about them:

Remember, as far as the project team was concerned, they were only collecting printer information to evaluate printing options for users at the two regional offices (with local print servers) that had to print from applications running on Terminal Servers located at the main office.

The evaluations revealed that only about twenty people from each regional office needed to print from Terminal Servers at the main office. Most of these were using Windows XP workstations, although a few in the Customer Service Department were using HP Evo thin client terminals. Some users needed to print in color, and they did print quite often from their central applications. The printers they used were HP LaserJet 8000N's, and they often printed on both sides of the page.

Based on this analysis, and the information that the project team received from their interviews, they built this list of requirements:

A third party utility would provide the best overall solution for the regional office users that needed to print from applications running on the main office Terminal Servers. The only real disadvantage to that approach was the fact that the third party tool had to be purchased in addition to their Microsoft software. However, the team figured that increased performance and decreased configuration effort would allow the new software to pay for itself very quickly.

In this case, the project team was able to quickly make a decision without any disagreement. They decided to use the same third-party printing utility that they will use for the regional offices, allowing the users at those facilities to make full use of their color and laser printers without the need to install any client software on users' workstations.

Finally the project team addressed the printing needs of the home users. The home users all run Terminal Server sessions off the servers at the main office. Almost all of the fifty home users have local printers installed. The printers are connected to their laptop computers via USB or the parallel port. As the project team discussed earlier, the big challenge concerning these users was that no one can be sure of what kind of printers they have. Some team members estimated that there may be as many as thirty different types of printers out there.

Fortunately, the printing technology decision for the home users was also easy to make. The project team knew that they were working with these requirements:

All of these requirements naturally lead the team to one solution: third party printer management software. The server component of this software would be installed on each of the Terminal Servers. A client component would be installed on every RDC client device. Once this client software is installed, the Terminal Servers send small, unrendered metafile print jobs to the client. The third party software installed on the client computer renders the print jobs locally, allowing any printer to be used, as shown back in Figure 7.8.

By carefully analyzing all of the unique requirements of each printing scenario, the Dina Gourmet Food Service project team was able to successfully design a Windows 2003 Terminal Server printing solution that allows users to print documents with the speed and flexibility they need.