NAT enables private IP addresses to be translated into public IP addresses for access to and from the Internet. This keeps traffic from passing directly to the internal network while saving the small office or home office user the time and expense of getting and maintaining a public address range. This lesson provides an overview of NAT.

NAT allows computers on a small network, such as a small office or home office, to share a single Internet connection with only a single public IP address. The computer on which NAT is installed can act as a network address translator, a simplified Dynamic Host Configuration Protocol (DHCP) server, a Domain Name System (DNS) proxy, and a Windows Internet Name Service (WINS) proxy. NAT allows host computers to share one or more publicly registered IP addresses, helping to conserve public address space.

With NAT in Windows 2000, you can configure your home network or small office network to share a single connection to the Internet. NAT consists of the following components:

There are two types of connections to the Internet: routed and translated. When planning for a routed connection, you need a range of IP addresses from your Internet service provider (ISP) to use on the internal portion of your network. Your ISP should also give you the IP address of the DNS server you need to use. You can either statically configure the IP address configuration of each computer or use a DHCP server.

The translated method, or NAT, gives you a more secure network because the addresses of your private network are completely hidden from the Internet. The connection-shared computer, which uses NAT, does all of the translation of Internet addresses to your private network, and vice versa. However, be aware that the NAT computer cannot translate all payloads. This is because some applications use IP addresses in fields other than the standard TCP/IP header fields.

The following protocols do not work with NAT:

The DHCP allocator functionality in NAT enables all DHCP clients in the network to automatically obtain an IP address, a subnet mask, a default gateway, and a DNS server address from the NAT computer. If you have any non-DHCP computers on the network, statically configure their IP address configuration.

To keep resource costs to a minimum on a small network, only one server running Windows 2000 is needed. Depending on whether you are running a translated or routed connection, this single server can suffice for NAT, Automatic Private IP Addressing (APIPA), Routing and Remote Access, and DHCP.

If your intranet is not connected to the Internet, any IP addressing can be deployed. If direct (routed) or indirect (proxy or translator) connectivity to the Internet is desired, there are two types of addresses you can use: public addresses and private addresses.

When analyzing the addressing needs of organizations, the designers of the Internet noted that for many organizations, most of the hosts on the organization's intranet did not require direct connectivity to Internet hosts. Those hosts that did require a specific set of Internet services, such as World Wide Web access and e-mail, typically accessed the Internet services through application-layer gateways such as proxy servers and e-mail servers. The result was that most organizations only required a small number of public addresses for those nodes (such as proxies, routers, firewalls, and translators) that were directly connected to the Internet.

Dynamic mappings are created when users on the private network initiate traffic with Internet locations. The NAT service automatically adds these mappings to its mapping table and refreshes them with each use. Dynamic mappings that are not refreshed are removed from the NAT mapping table after a configurable amount of time. For TCP connections, the default time out is 24 hours. For UDP traffic, the default time out is 1 minute.

By default, NAT translates IP addresses and TCP/UDP ports. These modifications to the IP datagram require the modification and recalculation of the following fields in the IP, TCP, and UDP headers:

If the IP address and port information is only in the IP and TCP/UDP headers—for example, with Hypertext Transfer Protocol (HTTP) or World Wide Web traffic—the application protocol can be translated transparently. There are applications and protocols, however, that carry IP or port addressing information within their headers. File Transfer Protocol (FTP), for example, stores the dotted-decimal representation of IP addresses in the FTP header for the FTP port command. If the NAT does not properly translate the IP address, connectivity problems can occur. Additionally, in the case of FTP, because the IP address is stored in dotted-decimal format, the translated IP address in the FTP header can be a different size. Therefore, the NAT must also modify TCP sequence numbers to ensure that no data is lost.

In the case where the NAT component must also translate and adjust the payload beyond the IP, TCP, and UDP headers, a NAT editor is required. A NAT editor is an installable component that can properly modify otherwise nontranslatable payloads so that they can be forwarded across a NAT. Windows 2000 includes built-in NAT editors for the following protocols:

IPSec traffic is not translatable.

An example of NAT

If a small business is using the 192.168.0.0 private network ID for its intranet and has been granted the public address of w1.x1.y1.z1 by its ISP, NAT maps all private addresses on 192.168.0.0 to the IP address of w1.x1.y1.z1. If multiple private addresses are mapped to a single public address, NAT uses dynamically chosen TCP and UDP ports to distinguish one intranet location from another. Figure 14.1 shows an example of using NAT to transparently connect an intranet to the Internet.

The use of w1.x1.y1.z1 and w2.x2.y2.z2 is intended to represent valid public IP addresses as allocated by InterNIC or an ISP. 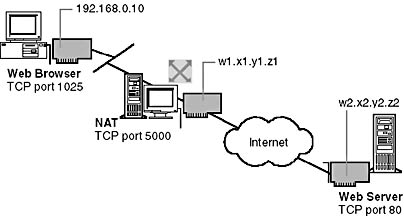 Figure 14.1 Using NAT to connect an intranet transparently to the Internet

Installed with the NAT routing protocol are a series of NAT editors. NAT consults the editors when the payload of the packet being translated matches one of the installed editors. The editors modify the payload and return the result to the NAT component. NAT interacts with the TCP/IP protocol in two important ways:

Figure 14.2 shows the NAT components and their relation to TCP/IP and other router components.

For traffic from the private network that is outbound on the Internet interface, NAT first assesses whether or not an address/port mapping, whether static or dynamic, already exists for the packet. If not, a dynamic mapping is created. The NAT creates a mapping depending on whether there are single or multiple public IP addresses available.

After mapping, the NAT checks for editors and invokes one if necessary. After editing, the NAT modifies the IP and TCP or UDP headers and forwards the packet using the Internet interface. Figure 14.3 shows NAT processing for outbound Internet traffic. 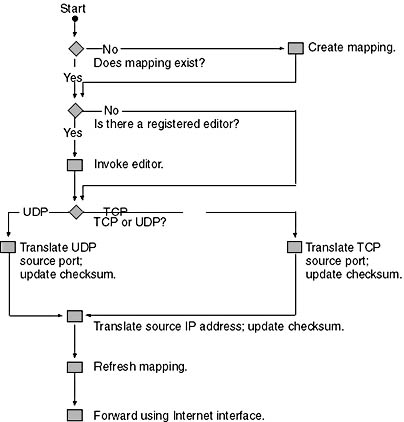 For traffic from the private network that is inbound on the Internet interface, the NAT first assesses whether an address/port mapping (whether static or dynamic) exists for the packet. If a mapping does not exist for the packet, it is silently discarded by the NAT.

After mapping, the NAT checks for editors and invokes one if necessary. After editing, the NAT modifies the TCP, UDP, and IP headers and forwards the frame using the private network interface. Figure 14.4 shows NAT processing for inbound Internet traffic. 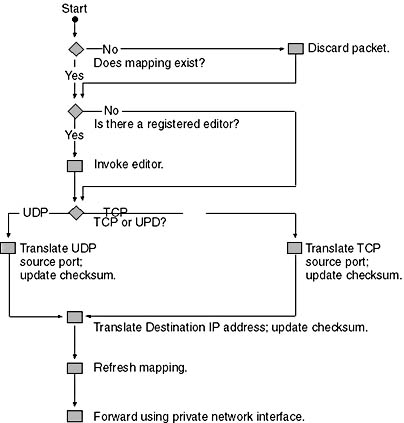 To help simplify the configuration of small networks connecting to the Internet, the NAT routing protocol for Windows 2000 also includes a DHCP allocator and a DNS proxy.

Table 14.1 lists the DHCP options in the DHCPOFFER and DHCPACK messages issued by the DHCP allocator during the DHCP lease configuration process. You cannot modify these options or configure additional DHCP options.

The DHCP allocator only supports a single scope of IP addresses as configured from the Address Assignment tab in the Properties Of The Network Address Translation (NAT) Routing Protocol dialog box in the Routing and Remote Access snap-in. The DHCP allocator does not support multiple scopes, superscopes, or multicast scopes. If you need this functionality, you should install a DHCP server and disable the DHCP allocator component of the NAT routing protocol.