This lesson examines some of the core Windows NT network services and configurations that will affect your Windows 2000 infrastructure design or that might necessitate fundamental redesign prior to deployment. The physical and logical network topology of the Windows NT network and the services it offers to clients will dictate such design issues as these:

Prior to migration, you should ensure that all diagrams of your network environment are current. Layouts displaying both the physical network and the logical network are required. The physical network diagram shows how the machines are actually connected and must contain the following details:

Figure 4.1 shows an example of a physical network diagram and the required types of information. 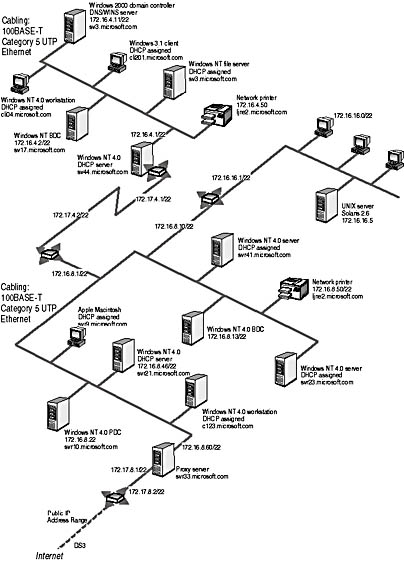 The logical network diagram should provide the following information: 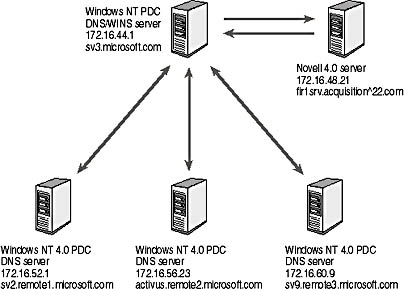 Understanding your physical network infrastructure will help with such Windows 2000 design issues as these:

Server types that exist in Windows NT and are carried over to Windows 2000 include:

Server types that are new and unique to Windows 2000 include:

Remember that several of these services can be held on the same server, so the infrastructure design issues might not seem as enormous. However, do try to include servers that can act as backups for fault-tolerance purposes. For example, once your new Windows 2000 infrastructure has been established, you should plan for a server that could take on the role of PDC emulator in case the current one for that domain fails or in case you need to take it offline for routine maintenance such as a memory or hard disk upgrade.

Examining the physical and logical network arrangements will give you an idea about where high amounts of network traffic are likely to occur. This can be confirmed by gathering information on the bandwidth usage and then analyzing what would happen if extra traffic from the migration or the new infrastructure were added to that area of the network. You should perform this analysis when you know the network is busy—for example, at the start and end of a work day.

You can use the Systems Management Server (SMS) Network Monitor component of Microsoft BackOffice to collect data on network loading and activity. The data will then allow you to establish a baseline requirement for network and server performance and the amount of spare capacity that will be available for use during the migration.

When assessing network traffic for design considerations, remember to build in capacity for other services in addition to Windows 2000, such as Microsoft Exchange Server 2000, workstation management services such as SMS, and online video training.

Establishing Bandwidth Use and Requirements

The failure of a server or network connection can seriously affect the configuration's overall performance as replication and authentication traffic is redirected. You should consider the impact of such failures as part of the analysis of the network infrastructure, both during and after the upgrade, and you should make contingency planning a part of your recommendations.

Unless the Big Bang approach is being adopted (in other words, the complete conversion of your Windows NT environment overnight), many of the network services just mentioned will need to be available to users during the migration. Hence, part of your migration plan must include how to minimize potential interruptions to the numerous network services that are running. For example, how will you maintain DHCP services while migrating the DHCP server so that users' systems will still be able to access the network? Your migration plan should minimize the impact on the business by keeping as many of the network services running as possible (see Chapter 12, "Business Continuity," for further information). The communications team should keep users informed of the teething problems they'll face during this period.

In this lesson, you learned to plan server locations by having an understanding of the physical and logical network topologies. You also looked at how the various network services need to be maintained during and after migration to keep the business running.

ERP and Data Warehousing in Organizations: Issues and Challenges
Inside Network Security Assessment: Guarding Your IT Infrastructure
Software Configuration Management
A Practitioners Guide to Software Test Design
The Java Tutorial: A Short Course on the Basics, 4th Edition
GO! with Microsoft Office 2003 Brief (2nd Edition)
flylib.com © 2008-2017.
If you may any questions please contact us: flylib@qtcs.net
Privacy policy
This website uses cookies. Click here to find out more.
Accept cookies