The content-based information retrieval (CBIR) of multimedia information, e.g., images, sounds, videos, etc., is one of the most important components in large-scale video archive systems. In order to achieve the content-based information retrieval, it is necessary to understand the contents of multimedia information. The most typical case is to express the contents by some feature vectors. In this case, the feature is an approximation of contents and information is retrieved based on the similarity of features assuming that the contents having similar features should be similar to each other. The dissimilarity between two feature vectors is often measured by the Euclidean distance. Once a query vector is specified, such a vector that is the most similar to the query vector is found by the nearest-neighbor search. With this approach, various kinds of systems have been developed. For example, QBIC [9] is well known as a typical example of the content-based image retrieval system. The practical effectiveness of this approach has been demonstrated by such prototype systems. However, this approach has two difficulties. Firstly, the feature vector is just an approximation of contents. Therefore, the content is retrieved based on the nearest-neighbor search of feature vectors. Secondly, the dimensionality of feature vectors tends to be quite high (e.g., 64 and 256 dimensional vectors are used by QBIC for representing the hue of colors). Thus, fast nearest-neighbor search of high-dimensional vectors is essential to CBIR. In order to alleviate these difficulties, multidimensional indexing methods have been studied by database system researchers. These methods are supposed to take an important role in building large-scale video archive systems which need to process a huge amount of data in a practical processing time.

R-Tree and Its Variants

The SR-tree is an enhancement of the SS-tree. It employs both the bounding sphere and the bounding rectangle as follows:

, wi , and ri (1 ≤ i ≤ n) are the same with those of the SS-tree, and MBRi (1≤i≤n) denotes the minimum bounding rectangle of the i-th child node. Thus, the difference between the SS-tree and the SR-tree is the addition of MBRi. Each sub-region of the SR-tree is determined by the intersection of the bounding sphere (given by 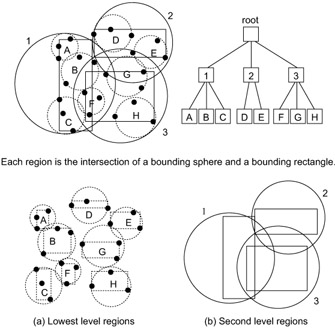 The multidimensional index structures can accelerate the nearest-neighbor search since the search can be accomplished with investigating a limited number of nodes (i.e., regions). This could reduce the search space significantly and would be much faster than investigating every feature vector one by one. The search starts from the root node and visits regions in ascending order of the distance from the query point. On visiting each region, the candidate of the nearest neighbor is determined by choosing the nearest point encountered so far. The search continues as long as there remains such a region that is not visited so far and that is closer than the candidate. The search terminates when no region remains to be visited. The final candidate is the answer of the query. The number of nodes to be visited is dependent on various circumstances, e.g., distribution of the data set, location of the query, and the characteristics of the index structure, etc. In the ideal case, the nearest neighbor can be found with traversing the tree from the root node to a leaf straightly. In this case, the search cost is logarithmic to the size of the database (i.e., the number of feature vectors). The results on the performance evaluation of the SR-tree can be found in [10].

In the case of the similarity retrieval of images, one feature vector is extracted from each image and nearest-neighbor search is conducted with comparing one vector to another. On the other hand, some multimedia information, e.g., videos, permits us to extract multiple feature vectors from each piece of multimedia information. In this case, the colored nearest-neighbor search can be employed for improving the accuracy of the similarity retrieval.

For example, in Figure 27.8, multiple feature vectors which are obtained from each sequence of video frames compose a colored set of feature vectors. The similarity of two vector sets can be measured by the distance of their closest pair as shown in Figure 27.8. In the case of the similarity retrieval of video sequences, the closest pair of two feature vector sets corresponds to the pair of the most similar video frames that are shared by two video sequences. This type of the similarity measurement has been used by the face sequence matching described below and the appearance matching by Nayar et al. [15].

Figure 27.8: Similarity retrieval of video frame sequences based on the closest pair.

However, this similarity measurement is rather computation intensive. The naive method of finding the closest pair of two vector sets is to compare every combination of vectors. In this case, the computational cost is a serious problem.

Suppose that we have a database containing N video sequences and retrieve such a sequence that is the most similar to a given query. If one vector is extracted from each video sequence, the most similar one can be found by N comparisons of feature vectors. On the other hand, if M feature vectors are extracted from each sequence, M M N comparisons are required to find the closest pair having the shortest distance. Of course, this estimation based on the naive implementation is like the linear scan but it is obvious that the computational cost is a serious problem for the colored nearest-neighbor search. Therefore, it is necessary to reduce the search cost in order to apply the colored nearest-neighbor search to large-scale video databases. From this perspective, we applied the SR-tree to the colored nearest-neighbor search.

In order to evaluate the effectiveness of the multidimensional index structures, we conducted an experiment of face sequence matching. A face sequence consists of the face images extracted from videos. Even if two face sequences are of the same person, they involve the variation in diverse aspects, e.g., facial expression, lighting conditions, etc. Therefore, the closest pair of two face sequences corresponds to the pair of the most similar faces that are shared by those sequences.

We measured the CPU time and the disk access (the amount of disk read) of finding such a sequence that is closest to a given query sequence. Every sequence in a data set is chosen for a query and the average of them is taken as the experiment result. Programs are implemented in C++. Tests are conducted on a Sun Microsystems workstation, Ultra 60 (CPU: UltraSPARC-II 360MHz, main memory: 512Mbytes, OS: Solaris 2.6). Figure 27.9 shows the measured performance. For comparison, the result of the implementation with the linear scan is also plotted. The horizontal axis indicates the number of face images in a data set. This number corresponds to the size of a database. The vertical axis on the left indicates the CPU time and the one on the right the disk access. The effectiveness of the SR-tree is more significant in the disk access. When the number of face images is 8134, the disk access of the SR-tree is only 18 % of that of the linear scan. This demonstrates that the SR-tree successfully reduces the search space with splitting the data space into the hierarchy of regions. This clearly shows the advantage of multidimensional index structures. The CPU time of the SR-tree is also much smaller than that of the linear scan; the former is 29 % of the latter. In addition, the ratio of the SR-tree to the linear scan, i.e., "SR-tree / Linear Scan" in the figure, decreases as the database size increases. This demonstrates the scalability of the proposed method and implies its effectiveness for large-scale databases.

Figure 27.9: Performance of the SR-tree with face sequence matching.