The query is represented using a two-level approach: a collection of individual feature queries and an aggregation function to combine the individual query distances into an overall distance.

As in section 4, the retrieval system returns to the user a ranked list l=<a1, a2, …> with the top results based on distance to the multi-feature query, and obtains relevance judgements rfs for the result objects as.

Query re-weighting assumes that for the η independent single-feature representation queries qi, each with a corresponding weight wi, there exist a set of optimal weights wiopt that capture the user's information need. The initial query typically starts with default values for the wi's; typically they all start with the same value: wi=1/η.

To describe the re-weighting approach let us assume without loss of generality that there are only two single-feature queries: q1 and q2 and which return distances in the range [0,1]. Figure 21.5 shows a two dimensional space that shows the distances of q1 vs. q2. Since the overall distance function is a weighted summation of the component distances, we can represent the query as a line L. The distance of the line to the origin is determined by how many objects are returned; as more and more objects are returned to the user, the line moves away from the origin. The line Li represents the query at iteration i of relevance feedback, based on the weights w1i and w2i. Objects between this line and the origin have been returned and shown to the user, that is, the objects in the region OCB. Assuming that an optimal query with weights w1opt and w2opt exists, we can represent it with the line Lopt. Objects between this line and the origin are deemed relevant according to the user's information need, that is, objects in the region OAB are relevant. At this point, the user marks as relevant the points that she has seen and are relevant, that is, the points in the area OAEB. Assuming the points A and B are known, we can construct a new line Li+1 with weights w1i+1 and w2i+1 for iteration i+1 that crosses points A and B for a given set of returned objects. In [21] the authors show that the slope of Li+1 lies between the slopes of Li and Lopt. As the user goes through more relevance feedback iterations, the line Li+1 converges to the optimal line (weights) Lopt. What remains now is how to estimate the points A and B based on the results 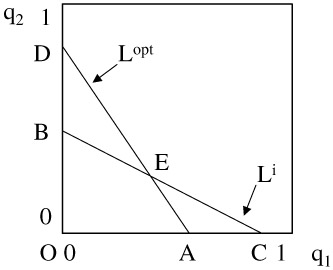 shown to the user and her relevance feedback. We explore two strategies for deriving Li+1: (1) maximum distance and (2) counting.

Counting strategy: This approach attempts to measure the length of the lines OA and OB by counting the number of objects relevant to the user, which are close to the query based on individual feature queries q1 and q2. To see the motivation, consider Figure 21.6. All points between the origin O and the lines labelled cutq1 and cutq2 are very close to the query based on the single-feature queries q1 and q2 respectively. If we assume that objects are uniformly distributed in the similarity space of the user's query, the number of objects close to the query based on single-feature queries q1 and q2 that are also relevant to the overall query are proportional to the size of the regions OIGB and OAFH respectively. Since the lines cutq1 and cutq2 are introduced at equal distance thresholds, the size of the regions OAFH and OIGB is proportional to the lengths of the lines OA and OB. Let Λq1=cardinality of aj | dq1(aj)<cutq1, and Λq2=cardinality of aj | dq2(aj)<cutq2. As a result, the ratio Λq1/Λq2 gives the estimate of the slope of line DC. Given the estimate of the slope, and the constraint that w1i+1+w2i+1 = 1, a weight update policy is straightforward: 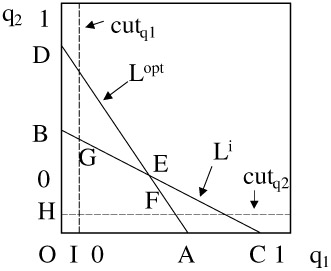 A step beyond re-weighting is to add or delete single-feature representation queries to the overall query. Deletion occurs naturally when re-weighting causes a weight to fall to 0. This effectively nullifies any contribution by that feature and thus is eliminated from the overall query. Adding new single-feature queries is more interesting. We present the approach described in [16] which is more general than multimedia retrieval.

We populate the column for each single-feature candidate query ck with the distances from ck to every result aj. For each column that represents a candidate query we compute the average and standard deviation between relevant and non-relevant results:

Using this information, we compute the "separation" between relevant and non-relevant answers for each ck:

We add ck to the overall query iff: sepk > 0 ⋀ ∀ (v ≠ k) sepk > sepv, that is, we add ck to the query if there is at least one relevant and non-relevant standard deviation of separation between relevant and non-relevant values for ck, and choose the ck with the largest such separation. Experimental results in [16] show that this is a promising approach to adding component single-feature queries to the overall query.

Among the many techniques to alleviate this problem are the min-max and Gaussian normalization approaches. In the min-max approach, the retrieval system keeps track of the minimum and maximum distances observed for each distance function and feature representation and normalizes the final distance by the distance range (maximum-minimum distance). The Gaussian approach advocated in [17], among others, proposes to treat all distances as a Gaussian sequence. To normalize distance values, they are divided by a multiple of the standard deviation to ensure most distances (99%) lie in the range [0,1]. The drawbacks of this technique are a high up-front normalization cost, and that it assumes a specific distribution of distance values which may not hold. In practice, as long as the distances for different feature representations and distance functions are normalized to a comparable range, few unwanted problems appear. Both approaches roughly perform equally well.

[1]While this demonstrates the flexibility of this approach, in a realistic setting these choices may be hidden from the user and pre-arranged by the system developer.

[2]Remember that this query representation may be any of those discussed in section 4.