Video information, image processing and computer vision techniques are developing rapidly nowadays because of the availability of acquisition, processing and editing tools which use current hardware and software systems. However, problems still remain in conveying this video data from enterprise video databases or emails to their end users. As shown in Figure 14.1, limiting factors are the resource capabilities in distributed architectures, enterprise policies and the features of the users' terminals. The efficient use of image processing, video indexing and analysis techniques can provide users with solutions or alternatives. In this chapter, we see the video stream as a sequence of correlated images containing in its structure temporal events such as camera editing effects. The chapter will include a new algorithm for achieving video segmentation, indexing and key framing tasks. The algorithm is based on color histograms and uses a binary penetration technique. Although a lot has been done in this area, most work does not adequately consider the optimization of timing performance and processing storage. This is especially the case if the techniques are designed for use in run-time distributed environments. The main contribution is to blend high performance and storage criteria with the need to achieve effective results. 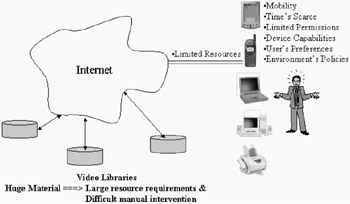 The algorithm exploits the temporal heuristic characteristic of the visual information within a video stream. It takes into consideration the issues of detecting false cuts and missing true cuts due to the movement of the camera, the optical flow of large objects or both. Another issue is the heterogeneous runtime conditions. Thus, we designed a platform-independent XML schema of our video service. We will present our implemented prototype to realize a video web service over the World Wide Web.

As depicted in Figure 14.2, the need for services of content-based video processing and analysis is becoming more useful and sometimes urgent nowadays due to the evolving number, size and complexity of the multimedia information and user's devices. Video data became a very useful way of conveying messages or sharing ideas among end-users. It is used in different aspects of life such as entertainment, digital broadcasting, digital libraries, interactive-TV, video-on-demand, computer-based education, video-conferencing, etc. 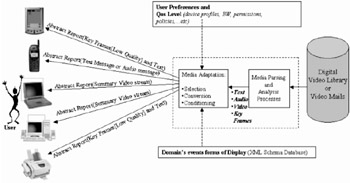 Figure 14.2: The goal— delivering the video message in an adapted form.

This chapter is organized as follows: First, we will provide some related work and literature in section 2. In section 3, we will start by describing the evolving algorithms that we implemented to perform the video segmentation process. We will present our binary penetration approach as a way to achieve this task with higher performance and lower requirements for computational and storage resources. In section 4, we will provide a generalization algorithm for the binary penetration algorithm that handles different camera angles and shot sequences. In section 5, we will describe our video cut detection software system with the use of the binary penetration algorithm. In section 6, we will show how we integrated the video indexing and segmentation algorithm into a web service to expose their functions using XML service interface. Samples of the developed video indexing and key framing service Interface will be presented along with some discussions in section 7. We will draw some conclusions of our work and future steps in section 8.