As described previously, the goal of a system is to produce a measurable outcome. In the case of most games, that outcome will be unequal; i.e., there will be a winner or winners. This is not true of all games: many massively multiplayer online worlds do not have the concept of a 'winner.' Also, simulation games may not have a predetermined win condition either. These games are built to go on indefinitely, and reward players in other fashions than by winning.

For most game systems, however, producing a winner or winners is the end goal. At defined intervals either the players (in the case of a nondigital game) or the system, check to see if a winning state has been achieved. If it has, the system resolves and the game is over.

There are a number of ways to determine outcome, but the structure of the final outcome will always be related to both the player interaction patterns discussed earlier and the objective. For example, in pattern one, single player versus game, the player may either win or lose, or, the player may score a certain amount of points before ultimately losing. Examples of this outcome structure are solitaire, pinball machines, or a number of different arcade games.

In addition to the player interaction patterns described on page 44, the outcome is determined by the nature of the game objective. A game that defines its objective based on points will most certainly use those points in the measure of the outcome. A game that defines its objective as capture, like chess, may not have a scoring system-rather, chess games are won or lost based solely on meeting the primary objective, capturing the king.

But many games are not zero-sum games. Ranking systems, statistics, multiple objectives all create outcomes without cutthroat competition. Look at the games you play: what types of outcomes are most satisfying? Does that answer change in different situations, for instance social games versus sporting events? When you determine the outcome for a game that you're designing, be sure to keep these types of considerations in mind. 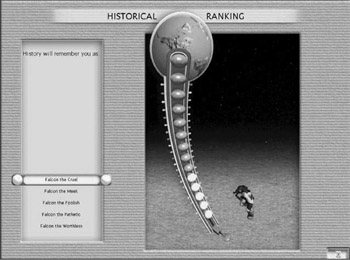 Name two zero-sum games and two nonzero-sum games. What is the main difference in the outcomes of these games? How does this affect gameplay?