In most cases, it’s best to use a standard word processor like Microsoft Word to create your design document, unless your company has a particular piece of software that they require. The advantage of using a common file format like a word processing document is that it can be easily distributed, and other team members can modify it or make suggestions.

Some designers like to create their design document as an internal web site rather than a text document. This has both advantages and disadvantages. If well done, it’s easy for everyone to access and update. You can easily post links to new sketches, builds, levels, and other works-inprogress for everyone to see. One problem with this method is that it’s not as portable as a standard document, or as easy to print out. Also, a web site can be more difficult to code and maintain.

A better strategy is to have a weekly update schedule, and to remind all the team members via an e-mail that lists the revised areas. This way, if your teammates are affected by the revision, they can download the new document. If you send updates more often than once a week, you’ll find that you begin to lose your audience—remember that these are very busy people. All they want to know is the vital information that they need to get their jobs done. If that is clearly presented in the document, easy to find, and updated regularly, your design document will be an effective tool for the production.

Chris Taylor is a prolific game designer and CEO of Gas Powered Games. He created an excellent template for writing design documents for digital games. The template is available for free on the Internet.

Game Design Workshop: Why did you write a design document template? And why did you decide to make it freely available?

Chris Taylor: I can’t remember the exact reason, but I think it was after a talk I gave where someone asked me if I had a sample design doc they could look at. I took the design for Dungeon Siege and basically used that by removing all the specific Dungeon Siege design. I took what was left and used that as a framework that I could share with others. As for sharing it, that wasn’t even something I thought about... I am happy to share stuff like this, that’s a no-brainer.

GDW: What is your personal approach to writing a design document?

CT: Each time I have sat down to write a game design the approach is usually evolved from the last one. When creating a new design I describe the high level stuff at the start of the document, and then cover the details later. One of the key things I do right up front is to answer the 10 most difficult and jaded questions that someone may ask that challenges my design. Like I have always said, if I can’t answer these questions, it’s a good time to reconsider why making the game is a good idea in the first place.

GDW: What is the role of a design document in a Gas Powered Games production? How often does one typically change during a production?

CT: A design doc is very important, but to the individual members of the team it’s the specification docs that are really key. These docs are what people actually use to create the game with. It’s very important to have the design docs, but they are only a starting place. In general it is possible that the design process be a fluid one but we try not to do that... anymore. It’s too expensive and confusing to constantly change design. It’s better to have a long pre-production phase where the design gets locked down, and then go into full production where the game is created. Sometimes an intermediate step is needed to prove-out the fun factor and playability of a game, but that’s a decision you make on a case-by-case basis.

Chris Taylor began his career in the videogames business at Distinctive Software in Canada. His first title, Hardball II was a sequel to the popular Hardball, and won the SPA (Software Publishers Association) award for best sports game of the year. Next, Chris created 4D Boxing, which won many accolades for its innovation as a 3D title. Chris later served as designer and project lead for the original Triple Play Baseball at Electronic Arts. Chris went on to create the highly acclaimed RTS, Total Annihilation, at Cave- dog Entertainment. After completing the expansion pack, “The Core Contingency,” he decided to start his own company. Chris founded Gas Powered Games in May of 1998. GPG released its first title, Dungeon Siege for the PC in April of 2002. Gas Powered Games has established itself as an innovator in both technology and gameplay, and is now working on its next round of games to be released in the near future. 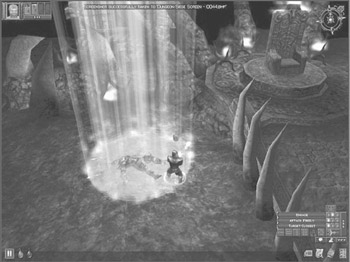 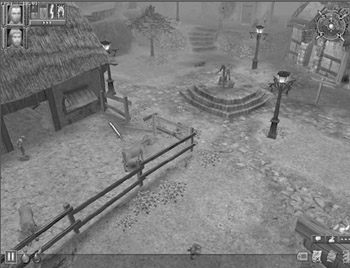