Historical Shifts in IS

Forty years ago, the world’s first computer-controlled communications network used in industry began operations at Westinghouse Electric, serving almost 300 U.S. locations (British Computer Society, 2003). A new Univac 490 computer took over the automatic routing of Teletype messages. The computer read the message destination in certain characters at the beginning. If the lines to a location were already in use, the computer stored the message until a line was free. Ten years later, an organization for Economic Cooperation and Development report caused some furor in Europe by making a strong case for separating post (mail) from telecommunications (British Computer Society, 2003). The strongest lobbies were on the postal side, while the greatest need for investment and the greatest potential payoff lay in telecommunications. Another 10 years later, data transmission was identified as a major growth area for the future, thus prompting the data communications industry to achieve dramatic growth through the 1970s.

In the 1980s the spread of PCs and networks revolutionized the IT industry. IT managers gained more boardroom influence, but their influence was still limited (Little, 1999). Many IT heads were known as data processing mangers and reported to the finance director. Their role was to provide IT infrastructure and manager systems and suppliers. Even more dramatic changes came 10 years later, when informatics began to prove to be a key factor for economic success and survival. In the early days of business computing, IT was viewed by business executives as an automation tool and a way to cut costs. IT managers, wandering between large mainframe-packed rooms, advised business managers on how to carry out tasks. IT bosses occupied a development and support role with little room for shaping company strategy.

During this period, a long era of corporate growth coincided with the longest bull market in history, culminating in the “dot-com” boom and subsequent bust. Throughout this era, computing moved out from the data center with the proliferation of PCs and became part of the infrastructure of almost all organizations (see Figure 2). The central control over IT spending slipped, and a cavalier attitude prevailed.

Figure 2: Four decades of momentous shifts in IS strategy

The whole of the dot-com boom embraced a mania to build Web sites and provide external browser-based interfaces to corporate IT applications, so that corporate software and data could be made available over the Web to customers, partners, and agents (Howcroft, 2001). Among this, there were, of course, many overzealous business initiatives that failed. The demise of many dot-com companies demonstrated that the return on investment was slim or nothing at all—although in many cases it was venture capitalists, investment companies, and private investors that took the hit. Learning from that period, central control of IT spending is being restored, and the IT department may now grow in importance if it can deliver value (Hagel, 2002; Howcroft, 2001; Subramani & Walden, 1999). However, the benefits that wise investment in IT can deliver have not vanished. Technology marches on and continues to create opportunities. Ideas being sought by senior executives, from IT departments, are those that offer quick returns at low risk (see Figure 3). Return on investment (ROI) is the driving dynamic, and the faster it can be delivered the better. At the beginning of the 21st century, the future does not look bright (see Figure 1). Most of the main companies are facing the consequences of unrealistic expectations and feeling the fragility of the field in times of semi or real recession. In some informatics societies in Europe, up to 10% of members have lost their jobs or are in danger of losing them if they do not adapt their skills to the new requirements of the market (Currie & Seltsikas, 2001). 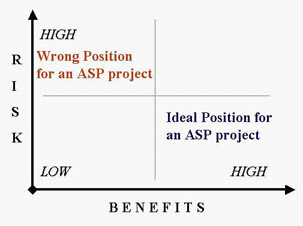