Previous page
Table of content
Next page
Using a Command

To use commands, you type them into the shell at the prompt. The shell executes the command line and displays output (if any), and then gives you another shell prompt. When the shell prompt comes up again, even if there's no other output, your shell is ready to accept another command.

Many command lines (but not all) produce output before returning a new shell prompt. It is quite common in Unix for a command to produce no visible output if it is successful (if it fails, a command should always produce output). In Unix, silence implies success.

To run a command:

The parts of a command line

The parts of a command line are separated by spaces. Basic command lines have up to four kinds of components :

Figure 2.5 shows the different parts of a typical command line (you'll recognize this as the command from Figure 1.4 in Chapter 1, "What Is Unix, and Why Is It Good?" that searched for all instances of the word success in a particular directory). 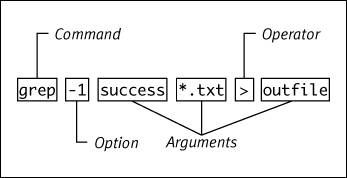 Each command may have multiple options and multiple arguments.

About the "command" part of the command line

When you enter a command line, the shell assumes that the first item on the line is a command.

There are two types of commands: those that are built into the shell you are using and those that are separate files somewhere on your disk. For example, if you run the cd command from the bash shell, you will execute the separate program /usr/bin/cd ; the tcsh shell has a built-in cd command.

The overwhelming majority of Unix commands are separate programsthat is, Unix commands are usually individual files that are actually small (or not-so-small) programs that perform a specific function, such as listing the contents of a directory (that would be the /bin/ls command).


Your PATHhow the shell finds commands

Options (also called switches or flags ) modify the way a command behaves. Most commands have at least a few options available, and many commands have a large number of options. As we noted when we talked about Unix's flexibility in Chapter 1, options frequently can be combined.

See Chapter 3 to learn how to ascertain the available options for each command.

To use one option with a command:

Here's a case where we want to combine two options in a command. The -s option gave us file sizes, using a unit of measurement (blocks) that might not always have the same value (blocks are usually 512 bytes but might vary, depending on a setting called BLOCKSIZE ). If we add the -k option, the sizes are shown in kilobytes, regardless of how BLOCKSIZE is set. ( BLOCKSIZE is an environment variable ; see Chapter 7.)

To use multiple options with a command:

Most commands accept one or more arguments . An argument is a piece of information the command acts upon, such as the name of a file to display. It's similar to the object of a sentence .

You used a command with a single argument in the tasks above. The single argument was /Developer/Tools , the folder whose contents you wanted to list. A command line can contain multiple arguments.

To use multiple arguments with a command:


Operators and special characters in the command line

A number of special characters often appear in command lines, most frequently the > , , and & characters.

The use of these powerful features is covered later in this chapter (see "Creating Pipelines of Commands").

Table 2.1 summarizes the most frequently used command-line operators and special characters, with examples of their use.

Some commands run for a long time, and sometimes they can get "stuck" (perhaps because a command is waiting for some other process to finish, or because of a network problem, or for any number of other reasons) and neither give output nor return you to a shell prompt. In those cases, you need a way to stop a command once you have started it. Here are two ways to stop a command.

If you are waiting for the shell prompt to appear, then you use

to stop the command.

To stop a command with Control-C:


To stop a command using the kill command:

Getting help for a command

Most commands have associated documentation in the Unix help system. Unfortunately, Unix help is almost always written for the experienced programmer, not for the novice user, so we have devoted all of Chapter 3, "Getting Help and Using the Unix Manual," to clarifying it.

You can skip ahead to Chapter 3 and come back if you like, but here is the bare minimum you need to at least begin to explore the help available for commands.

To read the Unix manual for a command: