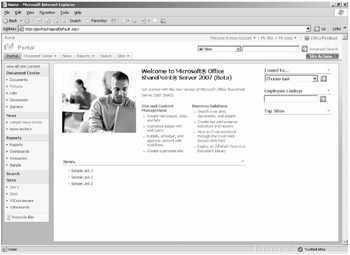 If you take a long step back from the actual page, you'll see that the portal is aggregating content from various locations and presenting that content to the user in a single view. The primary goal of SharePoint Server 2007 is to provide each of your users with a single location from which they can access or find all the information they need to do their jobs. The SharePoint Server 2007 portal goes a long way toward accomplishing that goal.

Second, My Site can be used to allow the end user to aggregate information in a single location, employing nearly any organizational method that seems to make sense to the end user. Items that can be aggregated include the following:

Other information that can be distributed by end users includes organization profile information, such as common managers, colleagues, site memberships, and e-mail distribution lists.

Knowledge Network software does not ship with the SharePoint Server 2007 product, but you'll be wise to download and install it to enhance the social-networking capabilities of your users. Knowledge Network addresses the following familiar problems:

The term weak ties refers to folks who know people whom you know. They are usually secondary or tertiary contacts made through your family and friends. In an organizational sense, they are often people who work at your company but with whom you have only occasional contact. People whom your colleagues know are your "second degree contacts" or what we call your "colleagues' colleagues." The friends and contacts of your second degree contacts are your "third degree contacts." These second and third degree contacts form your "weak ties." In social networking theory, weak ties connect together cliques or subgroups, which can provide powerful connections to new ideas, information, and opportunities. An organization needs to have a deep social network and expertise profile for an individual if that profile is to have any worth. Automating the creation of that profile is the key to unlocking that person's tacit knowledge-that is, knowledge that is not readily available in a documented form.

As you might expect, the taxonomy features of SharePoint Server 2003 have been retained in SharePoint Server 2007, so you still have a Sites Directory to organize sites across your organization, a News page to organize and present news and announcements that pertain to the consumers of the portal, and the ability to use the portal's home page as your intranet's home page.

In addition, Microsoft has made significant investments in relevance capabilities, which ensure that the right information (or the most relevant information based on the query) appears at the top of the result set.

Microsoft has also made the search result set more customizable and certainly more user friendly. For example, if you misspell a word in your search query, the Did You Mean (DYM) feature prompts you to repeat the search using the correct spelling.

Under this broad umbrella are three very distinct and needed feature categories: Web content, records management, and document management. All three are now included in SharePoint Server 2007. In addition, you can both secure and privatize content by using a combination of permissions and Windows Rights Management Services (RMS).

Content management provides end users with the capability to author content on a Web site and publish that content to a public-facing Web site either manually or on a schedule. Embedded in the publishing model is workflow for approval routing. Auditing is included as part of this process so that security and regulatory compliance needs can be achieved using SharePoint Server 2007.

The features and functionalities of what used to be known as Microsoft Content Management Server 2002 are now included with SharePoint Server 2007. As a product, Content Management Server (CMS) no longer exists. The Web content management feature essentially has become the publishing model for Web content using the CMS features and ideas from the CMS product line. Now users have a spot in which they can create new Web content, run it through an approval process, and then publish that content to another, public Web site. This staging feature covers not only Web content but also custom code and modifications to the site.

Records management is also provided by SharePoint Server 2007. By using content types, you can now manage bits of information, such as e-mail messages, that have traditionally existed across a wide range of repositories.

Document management allows an organization to create a single location at which finished documents can be placed for consumption by parties with the correct permissions. Inherent in this process is the ability to audit what happens to the document and place expiration dates on documents that should expire after a given amount of time.

Because many corporations and organizations operate in multilingual environments, SharePoint Server 2007 allows for documents to be translated and indexed across multiple languages. For example, a Microsoft Office Word document can be created using French and then opened in a German version of Word, appearing in the German language. The localization of content for users in different locations speaking different languages is one of the new, key features in SharePoint Server 2007.

In addition, RMS, which allows content to be privatized, is embedded in the SharePoint Server 2007 platform. The difference between permissions (who can access the resource) and privatization (the actions that can be committed by those who do have permissions to the content) is important. With SharePoint Server 2007, you'll be able to both secure and privatize content by using a combination of permissions and information rights management. If you're not accustomed to working with certificates, you'll need to ramp up on Public Key Infrastructure (PKI) because implementing RMS will require a working knowledge of PKI. For more information about PKI, see Microsoft Windows Server 2003 PKI and Certificate Security (Microsoft Press, 2004) and also review the topic "Designing a Public Key Infrastructure" found on the PKI TechCenter on Microsoft TechNet (http://www.microsoft.com/windowsserver2003/technologies/pki/default.mspx).

This means that you can extend data-gathering activities to anyone who has a browser and nothing more. Hence, you can make your forms-driven business processes accessible to customers, partners, and suppliers through a Web browser. By using the advanced browser-based form-rendering technology built into Forms Server 2007, you can design cool forms that provide a positive user experience.

In addition, you can create forms to act as front-end data-gathering tools for your Line-of-Business (LOB) applications. You can also connect multiple forms to existing data systems using Web services.

Some other features of Forms Server 2007 include the following:

Microsoft Business Intelligence (BI) is a focal area for Microsoft software in SharePoint Server 2007. Part of the premium content services, BI is focused on aggregating information into a report structure and presenting those reports in a report center. BI is much more than simple information regurgitation. BI is a prepackaged solution that combines SQL Server 2005, SharePoint Server 2007, and the 2007 Microsoft Office system client to help deliver the right information at the right time in the right format. Three main parts to this solution exist and can be used separately or in conjunction with each other.

The first part is the business scorecard solution, Microsoft Business Scorecard Manager 2005 (BSM). Also offered as part of the larger Microsoft Office PerformancePoint Server 2007 brand, this solution enables you to keep track of employee productivity. Office PerformancePoint Server 2007 offers scorecard capabilities that help users better understand what is happening in their business and align their actions with corporate strategy. Users can build and manage personalized scorecards without looping in IT as well.

The second main area of BI in SharePoint Server 2007 is the Microsoft Office Excel Calculation Services. Microsoft Office Excel has long been a favorite tool for analyzing information, and this product now delivers Excel functionality in a zero-client format if needed. In addition, Excel users gain a server-side component wherein the spreadsheet can be configured to maintain a persistent connection between their Excel spreadsheet and the data source. Moreover, new features include complete support for SQL Server 2005 Analysis Services, greatly expanded spreadsheet capacity, improved sorting and filtering capabilities, rich data visualization schemes in both Excel and Microsoft Office Visio, and enhanced PivotTables and PivotCharts.

One of the main drawbacks of Windows SharePoint Services 2.0 was the lack of a security-trimmed user interface (UI). The UI in Windows SharePoint Services 3.0 is now security trimmed so that users will see only links to which they have permissions to perform actions or access resources. In concept, this feature stems from the Access Based Enumeration (ABE) with Windows Server 2003 Service Pack 1. The idea is that if a user can see, but not use, a resource, this is still a security problem. On file servers, this can be especially critical when a user can see the file names of files to which she does not have access. In SharePoint, the administrative links don't represent access to resources, but they do represent access to actions that users should not see if they can't perform the action. This keeps users from "wandering" a site, trying to perform administration actions that they shouldn't be trying to perform.

Other new features in Windows SharePoint Services 3.0 include the following: