Following are the four major pieces to the Performance tool:

Each of these provides a different, but complementary, function in system monitoring.

Arguably the most utilized function of the four is System Monitor. This is the graphical representation of the counters that have been selected for monitoring. Counters are views into the core of the operating system that have been exposed to you as the system administrator for tracking. When a server such as Microsoft SQL Server or Office SharePoint Server 2007 is installed, new counters are installed that are specific to the server platform and that have been designed to provide performance information about that specific platform. A good example is with SQL Server. After installation, objects called SQLServer:Locks with various counters are added. Monitoring these counters will tell you if two or more SQL jobs are creating a lock on your SharePoint Server 2007 database and causing you to be unable to serve pages. 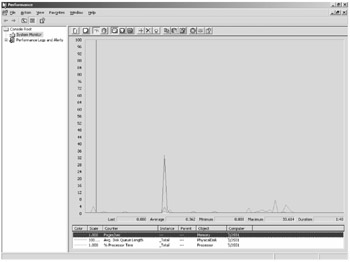 Another important component is how these logs can be recorded. The default format is a binary file, which is a good compact format that can be read by anyone with the Performance tool. Other ways to record these logs include using a text file (either tab-delimited or comma-delimited), binary circular file (which allows for setting a size limit so that the oldest point is deleted when the maximum size is reached), or SQL database. SQL data is the superior file type for long-term monitoring because it allows you to keep the data in a very compact format and allows for complex queries on your performance data. Figure 13-2 shows the Properties configuration screen for the default System Overview counter log in the Performance tool. 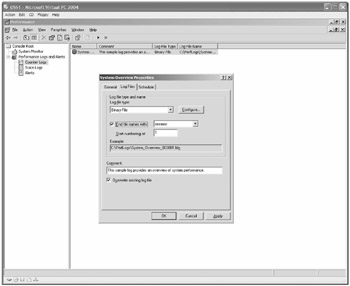 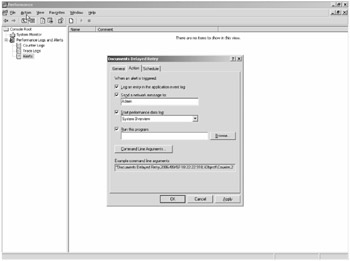 The Performance tool allows you the flexibility of any combination of these actions, based on the list of counters. Alerts can also be scheduled. For example, you can turn off the alert for Physical Disk Queue length during the time at which a SQL Log Shipping transaction is running because high amounts of I/O will be generated for legitimate reasons. With SharePoint Server 2007, use the Office Server Search Search Gatherer\Documents Delayed Retry counter to alert you when a non-zero value occurs. This condition indicates a server is unavailable during crawling.