Figure 8-3 shows the Runtime pattern and Product mapping we used to demonstrate the Direct Connection application pattern within the business domain of an organization, using Web services technology. It illustrates the logical connection between the source and target applications provided using SOAP.

This view of the solution can be further expanded to obtain a "stack" of coupling adapter pairs over "virtual" connections between the source and target, as shown in Figure 8-4. In this diagram the dotted line represents a virtual connection which is actually implemented at lower levels.

A number of factors affect the design of a Web service. In this section we discuss some of the factors we considered when building our sample application.

The advantages of SOAP RPC-based Web services are:

The disadvantages of RPC-based SOAP messaging are:

Web services support a number of transmission operations. These are the different types of operations that can be defined in a WSDL file:

The Direct Connection Call variation is a Request-response operation, while the Message variation is one-way.

In principle, SOAP is transport protocol independent and can therefore potentially use a variety of protocols (such as HTTP, JMS, SMTP, and others) to connect the Web service requestor and the provider.

HTTP is currently the most popular transport protocol for SOAP. The reasons for this mainly result from the following advantages:

But there are also some important limitations:

For example, if you need assured, once-only delivery, message-oriented middleware may be more suitable. In Java you can use Java Messaging Service (JMS) with IBM WebSphere MQ. The advantages are:

On the other hand you have the following disadvantages:

With the increasing adoption of Web services, the portfolio of supported transport protocols will also increase.

We use the HTTP transport protocol in our sample solution to demonstrate the Direct Connection pattern because HTTP can provide the point-to-point connection we need between source application and target application without the need for added infrastructure.

The source (requester) application can use either static or dynamic discovery of available Web services. The requester has to begin with the WSDL file that describes the interface and implementation specification of the Web service to be invoked. This WSDL file can be retrieved dynamically using a service registry, or statically, as shown in Figure 8-5. 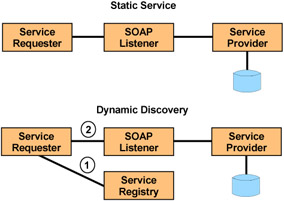 Three types of discovery methods for requesters can be identified:

Although early thinking on Web services asserted that discovery using UDDI would play a significant role in the implementation of the technology, at this time the vast majority of business solutions do not make use of dynamic discovery mechanisms. For this reason, our sample application uses the static service discovery method to access the WSDL file. For further details on dynamic discovery with examples, refer to the following redbook:

For an example using an XML message see "Message structure" on page 187.

In this section we provide an object model for our RPC-based Web services scenario. We focus on how the source application accesses the target application using the JAX-RPC API in WebSphere V5.0.2.

Figure 8-6: Class diagram of the Web service requester and provider (source and target)

The InventoryService, InventoryServiceLocator, and InventorySoapBindingStub shown in Figure 8-6 were generated from the WSDL file. The WebServicesServlet is provided in the WebSphere V5.0.2 Web services runtime.

In this section we provide interaction diagrams for the Message variation and Call variation of our RPC-based Web services scenario.

Our implementation of the Update Inventory use case follows the Message variation, where the source application does not expect or wait for a response from the target application.

The interaction diagram in Figure 8-7 shows the sequence of steps performed when the source application uses the WebServiceBean to perform the updateInventory() method:

The one-way invocation of the Web service does not block the client application. Execution control returns back through the chain to the WebServiceBean at step 4, without having to wait for the updateInventory call to the InventoryBean to complete.

Our implementation of the Get Delivery Date use case follows the Call variation, where the source application expects and waits for a response from the target application.

The interaction diagram in Figure 8-8 shows the sequence of steps performed when the source application uses the WebServiceBean to perform the getDeliveryDate() method:

The delivery date then gets passed back through the chain to the requester side and to the WebServiceBean that made the request to begin with.