Controls are the basic elements for user interaction in the user interface. Most of the user interface elements you see are controlsthis includes buttons , menus , views, and most other UI elements. Every control is derived from the abstract base class CCoeControl (defined in the system header file coecntrl.h ), which gives it its fundamental features and capabilities. When it is visible, a control represents a rectangular area of the screen which can accept user input and/or display output. Controls may be nested within other controls to an arbitrary level (although practical considerations will usually limit the extent to which this is sensible ).

A window is a system resource (owned by the Window Server) representing a rectangular area of the screen that contains one or more controls. It provides the mechanism for displaying its controls on screen. Be aware, though, that application UI code does not draw directly to a windowit only draws to controls. A number of overlapping windows can be displayed simultaneously each window has a z-order attribute associated with it to represent its ordinal position (that is, the position between nearest the viewer and furthest away from the viewer). There is a family of classes representing windows, derived from RWindowTreeNode . A control's window can be obtained by calling the CCoeControl::Window() method.

Controls are said to be either simple or compound. A simple control is one which does not contain any other controls. In other words, it is solely responsible for drawing to the rectangle which it represents.

In order to illustrate this, imagine an application that simultaneously displays the local time at various locations around the worldfor example, New York City, London, and Tokyo, as shown in Figure 5-1. Clearly, the area of the screen displaying the times will need to change once a minute. However, the labels containing the city names will not normally need to be updated.

Imagine that the application also displays a map of the world, showing roughly the areas currently in daytime or nighttime. As time progressed, the application would need to update the highlighted and darkened areas of the map, but with much less frequency than the times. To summarize, the application therefore has areas on screen that:

Figure 5-2 shows the hierarchy of controls, contained within a single compound control, which might be used to address this requirement. The system is envisaged with two levels of compound control. First, the screen is split into the map and three "time-container" controls. Each of these time-container controls is then divided into a label (for the city name ) and a control to display the time.

Keeping the time control separate from its associated label will allow it to be redrawn at regular intervals, without the label needing be redrawn at the same time. The "time-container" compound control that owns them also provides a number of benefits:

Series 60 provides a huge number of reusable compound controls which have exactly these benefits: they hide specific and often complicated layout and drawing code from the developer, to produce a simple, encapsulated control that fulfils a particular purpose.

Controls draw onto windows, and so every control must have an associated window. Rather than give each control its own window, however, you can share a window between controls. Controls can be either "window-owning" (having their own window) or "non-window-owning" (sharing a window-owning control's window).


There are, however, some restrictions on the use of non-window-owning controls, as outlined here:

In order to construct a non-window-owning control, you need to call the SetContainerWindowL() method, passing the control whose associated window you want to share. For example:

In order to construct a window-owning control, you need to call the CreateWindowL() methodthis is usually performed in the control's ConstructL() method. For example:


CreateWindowL() will most often be called by the constructor of either a simple control, or of the top-level parent of a complex control. In the case of a simple control, this function provides it with a window over which the control will have exclusive drawing responsibilities. In the case of a complex control, the top-level parent will call this function to provide a window for which it will allocate areas of drawing responsibility to its constituents.

In general it is recommended that controls should be non-window-owning wherever possible, in order to conserve system resources. A control should be window-owning only when it requires the properties of a window, such as being able to overlap other controls.

All of these steps can be seen in the CSimpleControl class in Controls . The relevant sections of code from this class are shown here.

Creating a simple control class is quite straightforward. Here is the complete declaration of CSimpleControl note that apart from construction and destruction the only functions implemented are the two virtual functions from CCoeControl mentioned above.


Every control should have a ConstructL() method to carry out its second-phase construction. For most controls this will carry out at least the following basic steps:

You can see all three of these steps in the ConstructL() of CSimpleControl :


You will notice that CSimpleControl can behave either as a window-owning or a non-window-owning control. These lines in the ConstructL() are the only ones required to make this distinctionthe rest of the code for the control will be the same. It is good practice to write controls in this way, unless there is a compelling reason for them to be window-owning or not. (A dialog control, for example, will always be window-owning.) Writing controls generally , where possible, allows them to be easily used in different circumstances.

After construction, all that remains is to implement the two virtual functions Draw() and SizeChanged() from CCoeControl . The first of these is shown here:


The parameter to this function, aRect , specifies the area of the control that requires redrawing. This may be the entire control or just be a region of it (for example, if another window appeared over part of the control and has been dismissed). A more complex control may take care just to redraw this part of the control. However, in order to keep the Controls example simple, it is ignored here, and the whole control is redrawn each time.

Drawing is achieved by obtaining a graphics context and using Series 60 graphics APIs to draw to it. This example draws an ellipse, with black outline and red fill, to occupy the full height and width of the control's client rectangle, as shown in Figure 5-3. 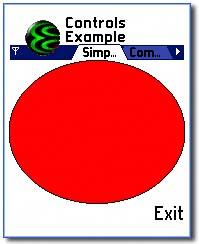 Finally, you just need to implement the SizeChanged() function to perform any steps required when your control changes size. In this case you will notice that the Draw() method above is entirely dynamicit gets the control's current size using the Rect() method, and all drawing is relative to that. Therefore, no specific handling is required for changes to the control's size, and SizeChanged() is empty:


You will see in the next subsection how SizeChanged() is implemented for a compound control. Further details of the Series 60 graphics APIs can be found in Chapter 11.

Implementing a compound control starts with the same steps as for a simple control:

In addition, you will need to do the following:

This subsection covers these steps with reference to the CCompoundControl class in the Controls application. This is a compound control which contains two instances of CSimpleControl and draws them in the top and bottom halves of the screen, as shown in Figure 5-4. 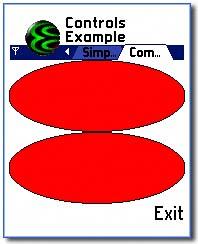 As before, the first step is to create a control class derived from CCoeControl . Notice that this time the control owns other controls as member data:


Construction of CCompoundControl looks very similar to that of CSimpleControl , with the addition of some extra code to construct the components controls:


CalculateRects() is a private utility function provided to calculate the client rectangles for the two component controls. It gets the current client rectangle for this control and splits it into two halves, which are stored in the member variables iTopRect and iBottomRect :

The framework iterates through each of the component controls by calling ComponentControl() to obtain a pointer to each. For each control it repeats these three steps, eventually stopping when it reaches a control with no component controls. In this way it is able to draw a compound control of arbitrary complexity.


And ComponentControl() is implemented as:


The final element that needs adding to make the compound control work properly is the SizeChangedL() function. Unlike CSimpleControl , CCompoundControl requires a non-trivial implementation to ensure its component controls are correctly resized. To achieve this, it re-uses the CalculateRects() function, as shown here:


This is all that needs to be done. Now when the framework draws the component controls, they will have their client rectangles set correctly and will be drawn appropriately.

The unique screen layout of Series 60 has an impact on the API design of its UI controls. Consider an application that provides a scrolling listbox of items. In Series 60, such scrollable controls do not own their scrollbar. Instead, the scrollbar appears as part of the dedicated menu pane, as in Figure 5-5 (the inverted triangle is the scroll indicator).

This requires the application's control to be able to reference the menu pane, in order to update the scrollbaras the user navigates the list, the scrollbar indicator must change to denote relative list position. As you have seen, parent-child relationships already exist between controls due to their implementation, but this doesn't provide a means of establishing communication between controls that do not possess the conventional hierarchical relationship. To satisfy this scenario, and in anticipation of other situations in which unrelated UI controls may need to interact, the MObjectProvider interface has been implemented.

This mechanism provides a relationship between all registered controls and allows a control to request access to others via its parentthe object request is continually passed upward (from child to parent, in an iterative fashion, with parent controls querying their child controls) until the request can be satisfied (or not, as the case may be).

The implementation of this interface for standard controls is provided by the systemthe only thing you need to do to take advantage of it is to call SetMopParent() for your control to establish the child-parent relationship necessary for the scheme to work.