Office-type applications are among the most common programs for a computer user to work with. Word processing, spreadsheets, database management, and presentation software are elements of most office packages. Most Windows users are familiar with Microsoft Office and will need similar functionality in Linux. As was previously mentioned, later in this book we will give extensive coverage of Open Office, which is a full-featured office suite available free to Linux users. In a previous chapter we explored some other office applications such as KWord, KSpread, and GNU Cash that are available with KDE. If you installed both KDE and GNOME on your system, you will have access to many of these KDE applications, even under GNOME. Even if you did not install KDE and are strictly running GNOME, there are a few office applications that ship with GNOME that you can use. We will examine a few of these here.

GNOME ships with a very interesting word processor named AbiWord. If for some reason you do not have AbiWord on your PC, you can get it for free from www.abisource.com/. It is worthwhile to note that AbiWord is also available for Windows and Macintosh. This makes it a very useful word processor. Once you are comfortable with it, you can use the same word processor in a variety of operating systems. What makes AbiWord, shown in Figure 7.10a, so interesting for Windows users trying to make the transition to Linux is how similar the interface is to Microsoft Word. In fact, the AbiWord interface is virtually identical to some of the earlier versions of Microsoft Word. This means that learning to use AbiWord should be rather simple if you are already familiar with Microsoft Word. 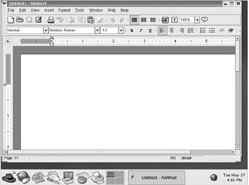 If you compare this to Microsoft Word, shown in Figure 7.10b, you will see that the two have very similar layouts. 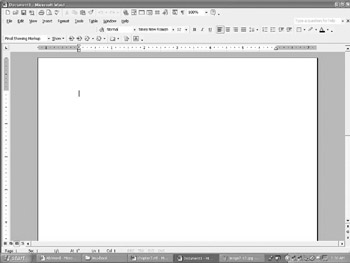 The toolbar and general layout of AbiWord should look quite familiar to Microsoft Word users. If you take a look at some of the more commonly used drop-down menus, you will find that they not only have many of the same options that Microsoft Word has, but in many cases they are found in the same place. For example, if you choose Format from the drop-down menu in Microsoft Word, as you see in Figure 7.10c, the first three options are Font, Paragraph, and Bullets. If you look under Format in AbiWord, you will see that its first three options are also Font, Paragraph, and Bullets. 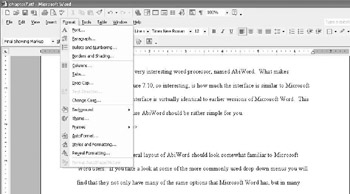 This remains the case for many of the drop-down menus. In both Microsoft Word and AbiWord you will find that under Insert you have Page Number, Break, and Picture. With both software packages you will find the spell checker under Tools. Essentially, AbiWord’s strength is that it is so similar to Microsoft Word that any competent Word user should have no problem changing to AbiWord.

One of the most important features of AbiWord is its import capabilities. It can import documents that are in a Microsoft Word, Rich Text, HTML, or plain text format. This means that you can read documents that were written with other word processors. This is an invaluable feature because it is unlikely that all of your friends and colleagues are going to drop their current favorite word processors in favor of AbiWord.

In addition to word processing, many people frequently find that they need to do some type of numeric calculation. Number crunching is a fact of life for everyone, not just bookkeepers and accountants. With GNOME, you have access to GNumeric Worksheet, a versatile and user-friendly spreadsheet program. This program is found by selecting Office from the Start menu and looking under More Office Applications. If for any reason your machine does not have GNumeric Worksheet, you can download it for free from www.GNOME.org/projects/gnumeric/. You can see GNumeric Worksheet in Figure 7.11. As you can see, it has a fairly standard interface, not much different from Microsoft Excel or KSpread. 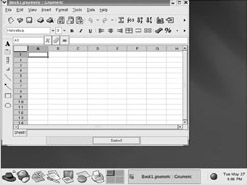 We will look at a few of its key features, enough that you should be able to effectively use GNumeric Worksheet. The basic data entry is the same for all spreadsheets; simply type data directly into a given cell. If you want to put in new rows, columns, cells, or even graphs, you can do that from the Insert drop-down menu. The Format drop-down menu is fairly standard. It allows you to change font, alignment, and related properties of columns, rows, or individual cells.

The most interesting thing about GNumeric Worksheet is under the Tools menu. Here you will find a rich assortment of very valuable tools. The first thing to direct your attention to is the Statistical Analysis option. Under this you have several categories that allow you to do a variety of statistical workups on your data, including an ANOVA (for readers not well versed in statistics, you will probably not find these statistical function options of particular interest). There also are options to generate standard descriptive statistics (mean, median, mode, standard deviation, and so on) and to do regression analysis. Math and physics aficionados will be thrilled to see that GNumeric Worksheet will even do a Fourier analysis.

What may be of even more interest to you is that GNumeric Worksheet can import files from Microsoft Excel, Lotus 1-2-3, and Quattro Pro. This ability to import files from other spreadsheet applications is a very important feature. Just because you have elected to move to Linux does not mean that all of your business colleagues have. For that reason, you will need to be able to read files they produce.