This chapter teaches you how to accumulate measures in a fact table, something you have to do if, say, your data warehouse users want to track month after month measures. In this chapter you also learn that accumulated measures are semi-additive and that its initial population is much more complex than any of those you’ve done in the previous chapters.

In this chapter I show you how to implement an accumulated month-end balance and how to change our data warehouse schema and initial and regular population scripts. 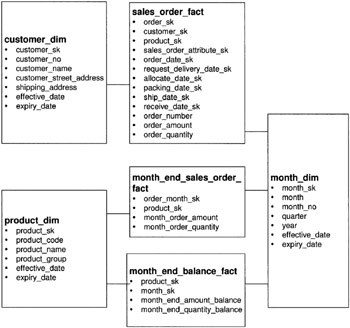 The month_end_balance_fact table creates an additional star in your schema. The new star consists of this new fact table and two existing dimension tables from another star, product_dim and month_dim. Figure 24.1 shows the new schema. Note that only related tables are shown.

The script in Listing 24.1 can be used to create the month_end_balance_fact table.

Run the script in Listing 24.1 to create the new fact table.