The Event Management System (EMS) retrieves and reports on system events. An event is any significant occurrence in the system environment. Event messages are based on tokens that define information about events. The information can be used to:

Monitor the system or network environment

Report and analyze changes in the run-time environment

EMS provides facilities that derive display text from message tokens so that EMS information can be presented both to operators and to applications in the format most appropriate to each.

EMS messages are subsystem specific, so the information they contain can be tailored to provide an exact and complete specification of the event circumstances.

There are three categories of events:

A subsystem will designate an event as critical when the consequences of the event might be severe. The subsystem itself cannot accurately determine what conditions should be considered severe for a particular system or network.

Potential or actual loss of data

Loss of a major subsystem function

Loss of a fault-tolerance capability, such as loss of a redundant resource or loss of a failure-recovery function

Loss of subsystem integrity (for example, an unrecoverable internal error in a subsystem)

Action events are reported in pairs of event messages:

The first message, the action-attention message, reports the problem.

The second message, the action-completion message, reports that the appropriate action has been taken.

The EMS Subsystem is made up of the following components (See Figure 6-5):

RISK The EMS subsystem is used for reporting only. It does not pose any security risks. 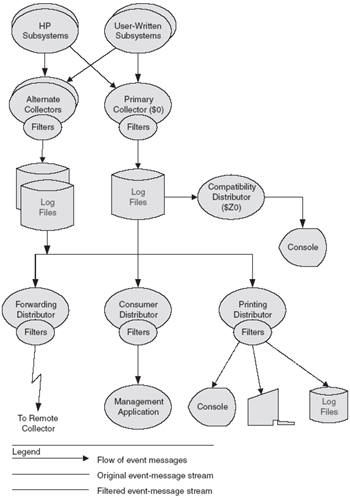 The Collector processes accept event messages from subsystems and logs them.

Pre-log filtration makes it possible to detect and discard all event bursts with specified attributes or specific unwanted events.

Each system (or node) has only one primary event message collector, named $0. It is initiated at system generation, and provides a central collection point for all events from all subsystems in a system.

It uses the $ZOPR process to perform waited operations. It has no user interface.

$ZOPR exists on every node and is initiated at cold load.

One or more alternate collectors can be started on a system.

Alternate collectors offer an alternative to the central collection point provided by the primary collector, $0. The separation of events into several log files speeds up event processing because a network application program does not have to read a single large file containing many events unrelated to that application

Each alternate collector maintains its own log files in a structure identical to that of the primary collector.

Alternate collectors are started with a TACL RUN command. They have user- defined process names .

Routing the selected event messages to the appropriate destination

Depending on the nature of the destination, one of four types of distributors can be used:

Forwarding Sends selected event messages to an EMS collector on another node in the network or to an alternate collector on the same node.

Printing Obtains formatted text for selected event messages and writes it to a printer or other display device, or to a file. When a routing filter is used, unformatted events can be routed to selected distributor processes.

Compatibility Filters event messages according to a fixed (rather than a user- specified) criterion, obtains formatted text for the selected primary collector event messages, and writes it to a console device.

The Compatibility Distributor facilitates viewing console messages during cold loads. $Z0 is the only method available to view these messages.

There is only one Compatibility Distributor per system and it must be configured during SYSGEN.

EMS Filters are used to select the messages that are sent to various EMS Logs. Each EMS collector can use one or more filters, which can be customized to filter out all events of a certain type or from a certain application.

There are three types of filters:

Burst Filters Burst filters are used to suppress EMS messages when duplicate messages arrive in a short period of time.

These utility programs are provided as part of the EMS Subsystem. They are used for interactive queries and controlling collectors and distributors.

EMSCCTRL The EMS Collector Control is used to change the parameters that control the primary collectors and the compatibility distributor.