A process is defined as "a particular program running within a defined environment that includes an independent set of registers, code-addressing space, and data-addressing space." By default, processes are managed by the Guardian environment. They are created via Guardian procedure calls (See Figure 5-1). 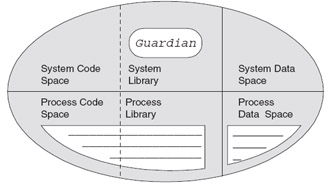 A process is created when a user executes a disk file containing object code. The user must have EXECUTE authority for the object file in order to create the process.

To fully protect processes, access to both the object files and the running processes must be protected.

Protecting the object files will be discussed in the chapters on File Security. This chapter concentrates on protecting running processes.

A program is a sequence of instructions and data that become a process when executed.

A program file is an executable object file. It contains primarily executable code, but may also contain other components such as initial or read-only data and linkage information. Unlike other object files, a program file has a main procedure.

Object files can be produced in two ways:

By compilers that translate the source program, written in a language such as TAL or C, into object code.

By linkers, such as the BINDER and NLD utilities, which link object files together.

Each process has multiple attributes:

When a process is created, it adopts the creator's userid as its CAID and the PAID of its creator as its PAID. This ensures that processes operate using the creating process's privileges and are able to access only those resources to which that process has been granted access.

RISK Note that a process' PAID can be altered with USER_AUTHENTICATE_ procedure calls or by executing a PROGID'd object file. Please refer to the Gazette section on PROGID.

BP-POLICY-PROCESS-01 Processes should not run PROGID'd unless authorized by appropriate management and documented by the Security Administration Group .

Running processes are also identified numerically on a list known as the Process Control Table, which is allocated in the system data space and protected. The numeric value for a process is known as the Process Identification Number (PIN), which is the index to the process in a CPU. The combination of a CPU number and PIN is a Process Identification (PID).

The PIN can be High or Low:

A High PIN ranges from 256 through the maximum number supported for the CPU.

The following properties can be specified for a new process:

Library file to be included in the process, if any

CPU where the process is to run

Only the following properties are of concern to security administrators:

Processes can be named or unnamed.

A NAMED process is one which had a name assigned when it was created.

An UNNAMED process had no name assigned when it was created.

Names can be created by the user or assigned by the operating system.

By default programs like EDIT and FUP run as UNNAMED processes.

Processing order is determined by the priority of processes in a READY state.

Processes of the same priority are executed in the order they become ready on the Ready List of the CPU.

New processes with high priorities execute before any processes of lesser priority that were already in the queue.

RISK All processes on a processor, including system processes and application processes, share the same priority structure, so it is very important that each process runs at an appropriate priority, one which permits necessary system operations when needed.

When Priorities Are Set

When priorities are set depends on the type of process:

I/O processes (but not disk processes) can have their priorities dynamically changed using the Dynamic System Configuration (DSC) utility on D-series systems or SCF on G-series systems.

User and Application process priorities are set during process creation. Processor- bound processes may have their priority reduced automatically to allow other processes to gain access to the processor. This is necessary to lessen the risk of a process taking over a CPU and pre-empting all other activity.

3P-CMON-PROCESS-01 CMON can be configured to manage which CPU and priority new processes will use.

3P-PROCESS-ADVICE-01 Third party process control software can be used to manage which CPU and priority the processes will use.

During its life, a process will pass back and forth between several process states (See Figure 5-2). 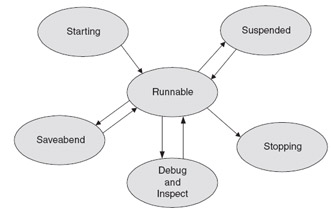 The ACTIVE process will go into a temporary WAIT substate when, during execution, it has to wait for an external event. Processes in the WAIT substate move back to the READY substate when their wait conditions are satisfied.

An ACTIVE process can be preempted by a higher priority process. When this happens, it goes to the READY substate. The highest priority READY process goes into the

When a process is created, it occupies space in virtual memory.

Each application or system process has physical CPU memory space allocated for object code, libraries, and data. The space where system code exists is separate from the space where application code exists. So, the operating system environment can be thought of as being divided into six sections:

The CODE SPACE contains program instructions and constants from the object file. Only READ access is permitted to the object code in the code space of a running process. This prevents modification of code during execution.

To maximize disk space efficiency, multiple copies of a process, even when running in different CPUs, can share the same object code on the disk.

To maximize memory efficiency, if multiple copies of a process are running in the same CPU, the processes all share one code space in memory.

DATA SPACE is used by a process to store and manipulate data. Each running process maintains its own private data space, modifying the data as required during execution.

LIBRARY SPACE is used by a process to store any routines loaded from libraries.

The HP NonStop server provides many tools for managing processes on the system, both at the Command-Interpreter level and the procedure-call level. To prevent users from using these tools to interfere with another user's process (for example, to delete someone else's process) or access privileged data, the operating system provides tools for protecting processes from each other and for protecting data from indiscriminate access.

Each Guardian process is assigned a creator access ID (CAID), a process access ID (PAID), and a STOP MODE.

The PAID is used to determine whether restricted actions against a process (such as stopping the process or invoking the debugger) are possible. Normally, the users who can stop a process are:

However, the STOP MODE can be set within a program to enforce various levels of security against stopping the process.

STOP MODE can restrict the ability to stop a process to one of the following:

Any process on the system can stop the configured process

Only the configured process can stop itself

Safeguard software can override the first two STOP MODES when Protection Records are in place.

RISK If a user creates a process configured so that only that process can stop itself, Safeguard software cannot override it. Even SUPER.SUPER cannot stop such processes.

CMON can perform load-balancing tasks . If configured, CMON can control:

The CPU a process will start in

AP-ADVICE-CMON-01 CMON can be configured to manage which CPU and priority new processes will use. See the chapter on CMON for more information.

Without the Safeguard Subsystem

Actions that a process (or user) can attempt on another process:

When a process is created, the PAID of the creating process becomes the CAID of the new process.

The PAID of any process attempting to affect another running process is compared with the CAID of the target process. If they do not match, the attempt will be denied .

The only exceptions to this rule are:

BP-USER-PRIVLEGE-03 No users should be assigned a Group Manager ID as a personal userid.

RISK Processes owned by SUPER.SUPER can manipulate any other processes.

BP-USER-PRIVLEGE-05 No user should be assigned SUPER.SUPER as a personal userid.

3P-PROCESS-PRIVLEGE-01 Third party process control software should be used to grant granular management of processes running as any Privileged ID for users who require these privileges in order to perform their jobs. These products generally also provide comprehensive auditing of the activities they secure.