The HP NonStop server is unique in both hardware and software components. It is the combination of these two components that make the HP server continuously available.

This section will give a brief overview of the HP NonStop server architecture as a basis for other discussions in this book.

The HP NonStop server platform is a scalable, shared nothing, multiple processor multiprocessing environment equipped with both hardware and software configured to provide continuously available service, that is, a computing environment where failures can be tolerated without eliminating the services provided.

The heart of the NonStop platform is the multiple processor, multiple inter- processor-bus, multiple controller and multiple disk hardware configuration. No single hardware failure should eliminate processing ”all paths are configured as redundant by default. Since the hardware is scalable, additional resources such as CPUs and disks can be added as necessary without requiring systems engineering to redesign the machine.

The software, both operating system and application, is designed to support the fault- tolerant hardware. The operating system continually monitors the status of all components, switching control as necessary to maintain operations. There are also features designed into the software to allow programs to be written as continuously available programs, that is, a pair of processes where one process performs all the primary processing and the other serves as a "hot backup", receiving updates to all data elements whenever the primary reaches a critical point in processing. Should the primary stop, the backup steps in to resume execution with the current transaction.

In addition, the application environment is designed for scalability and fault- tolerance. The primary application monitor for the HP NonStop server is "Pathway", a system of monitor processes and control programs that support a client/server environment. A Pathway is fault-tolerant at the transactional environment level ”that is, if a component of the application fails, the transaction in process is backed -out, the environment is modified to deal with the failed component and the user is returned to service with only a small amount of downtime (see Figure 2-1). 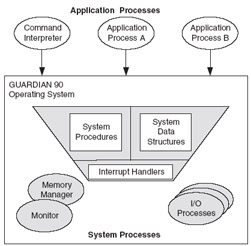 The HP NonStop server supports networking. Any individual system can have up to 16 processors on a single system, and up to 255 systems can be connected into a single network. Each system, called a "node", has a unique name and number, but can otherwise be used by all other systems for processing as necessary and as permitted by operating system security. The systems are connected with a high speed proprietary link called HP Expand software, which can run over many different communication media, such as dedicated fiber optic cable, TCP/IP or SNA for systems that rely on an IBM-mainframe based backbone for communications.

The NonStop server platform offers two personalities for interaction with programming and management staff. The "Guardian" personality is the original personality, currently used by most NonStop installations. The Open System Services "OSS" or "POSIX" personality is a UNIX-compatible implementation that is beginning to gain in popularity. When discussing security on the NonStop platform, it is important to distinguish between the two personalities as they support different security features.

In this handbook, OSS is treated both as a Subsystem and as an Environment within individual Subsystems. For example, $CMON can perform both logon mediation and LOAD BALANCING in the Guardian environment, but can only perform logon mediation in the OSS environment. So the advantages that a company can derive from $CMON depend on whether or not the company develops or runs its applications in OSS.

Qshell for iSeries
Adobe After Effects 7.0 Studio Techniques
Documenting Software Architectures: Views and Beyond
C++ GUI Programming with Qt 3
PostgreSQL(c) The comprehensive guide to building, programming, and administering PostgreSQL databases
An Introduction to Design Patterns in C++ with Qt 4
flylib.com © 2008-2017.
If you may any questions please contact us: flylib@qtcs.net
Privacy policy
This website uses cookies. Click here to find out more.
Accept cookies