As already mentioned, WLAN IEEE standards are specified by the 802.11 technical group . The initial 802.11 standard was published in 1997 [IEEE 802.11, 1997] to operate at 1 or 2 Mbit/s in the 2,4 GHz ISM band. Since 1997, some extensions were published: the 802.11b specifies higher bit rates to allow transmissions at up to 11 Mbit/s whereas the 802.11a specifies a new physical layer able to operate in the 5GHz band . Other sub-groups are also targeting extensions on specific issues such as the introduction of Quality of Service policies.

Both types of architecture introduced in section 3 are supported by 802.11 standards: 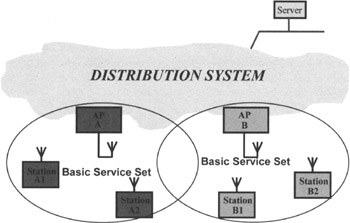 When a station enters a Distribution System, it has to associates itself with an Access Point before issuing any data transfer. It is also recommended to use an Authentication scheme to authenticate stations before any association. Once associated, the station can moves though the different BSS of the given Distribution System using a re-association scheme with the relevant Access Points ("roaming" function described in 802.11 standards).

802.11 MAC layer provides an asynchronous data service compatible with classical LLC entities as in wired LAN. Security services are also provided by the WEP (Wired Equivalent Privacy) mechanism. Whatever the underlying physical layer (802.11, 802.11a or 802.11b), the MAC layer remains the same.

The basic medium access scheme allows the stations to access the medium in a distributed way with contention resolution. It is standardised as the Distribution Coordination Function (DCF). Optionally , an Access Point can regularly use the Point Coordination Function (PCF) to temporally preempt the medium for provide access in a controlled and contention free manner.

Medium access in the DCF relies on a specific scheme named CSMA/CA (Carrier Sense Multiple Access/Collision Avoidance). This scheme uses a "listen before talk" mechanism in order to wait for idle channel before any transmission start. It is derived from CSMA/CD used in Ethernet and 802.3. The main difference is due to the fact that unless wired Ethernet station, the wireless stations can't detect collisions in real time as they can only send or receive data at one time (half duplex scheme). Then, CSMA/CA has been designed to avoid as much as possible collisions to occur. The scheme can be divided in different phases (see Figure 12.3):

Data frames have to be acknowledged once they are correctly received. This is done through short ACK frames sent just after the reception of a valid frame. When a data frame is not acknowledged , the sender station considers that a collision occurred.

In a system with hidden nodes (e.g. stations from the same BSS which are not able to listen to each others), it can appear that very frequent collisions occur. In order to reduce this problem, the standard supports optionally the exchange of short control frames before the transmission of a complete data frame. Hence, once the sender gets access to the medium, it first send a RTS (Ready To Send) frame and waits for receiving a CTS (Clear To Send) before starting the transmission of the data frame.

To enter in the centralised coordination PCF mode, the Access Point has first to preempt the medium, which is done by using a shortest waiting interval that the one used in DCF mode. Then, it polls the stations which are authorised to emit. Once the point coordination period ends, the systems comes back in the DCF mode.

In order to support the above described mechanisms, three "InterFrame Spaces" are defined in the standard:

It can be noted that SIFS < PIFS < DIFS.

The WEP (Wired Equivalent Privacy) algorithm is defined in the 802.11 standard to ensure data exchanges confidentiality. This algorithm can be complemented by a Shared Key Authentication scheme also standardised. The WEP algorithm is based on a secret key which, concatenated with an Initialisation Vector, gives a seed used as the input of a Pseudo Random Number Generator to generate a key sequence with the same length as the data to be transferred (use of the RC4 algorithm). This key is then used to generate the encrypted text to be transmitted concatenated with the initialisation vector. The way to distribute keys not standardised, most of existing products support manual configuration but enhanced scheme to generate and distribute dynamically session keys have been proposed recently by different manufacturers.

The FHSS specification is based on frequency channels of 1 MHz. Up to 79 channels are available depending on the region regulation (e.g. only 35 channels are authorised to be used in France). Each wireless station and Access Point which belong to a given Basic Sub System uses a standardised frequency hopping sequence, the permutation between two frequency channels is done each 0,4 second. A 2GFSK and a 4GFSK modulations are used in the 1 Mbit/s and the 2 Mbit/s modes respectively.

The IEEE 802.11 working group carries on he standardisation effort through different sub-groups. The main issues concern: harmonisation effort permitting cooperation or even interworking between North-America and European standards; liaison with international spectrum regulation instances; MAC layer enhancements permitting to introduce quality of service management schemes; specification of an inter-Access Point protocol; specification of a new high rate physical layer based on COFDM in the 2,45 GHz band (recently approved); the introduction of dynamic frequency selection and transmit power control algorithms required for being used in the 5GHz band in Europe; enhanced security schemes.

The ETSI published the first WLAN standard operating in the 5GHz frequency bands in 1997. Named HiperLAN (High Performance Radio LAN) Type 1, it enables operation at 23,5 Mbit/s, which were largely higher than the max 2Mbit/s throughput supported by 802.11 standards at that time. In spite of technical assets, the standard did not receive the industrial support necessary for issuing commercial products and only Dassault Electronique did develop advanced prototypes which shown the its efficiency [BERTIN, 2001]. 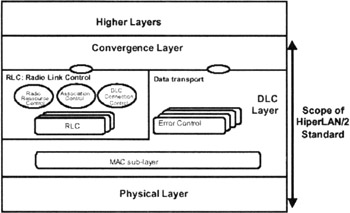 Later, new Convergence Layers could be standardised in order to support other types of protocols over the radio.

The DLC protocol provides a connection-oriented data transport service. It support the transmission of fixed size protocol units of 54 bytes (including DLC header) over the radio. A control plane is specified to manage connections, resource and association control. In the lower part of the DLC layer, control and data units are distributed among a MAC structure of fixed length of 2ms. MAC frames are transported by the PHY layer through a COFDM (Coded Orthogonal Frequency Division Multiplexing) scheme bit rate.me with link adaptation permitting the selection of the most adequate bit rate. 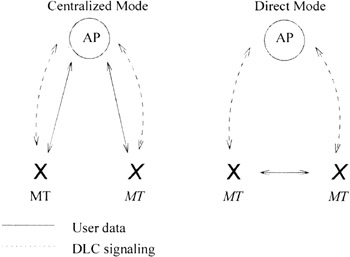 The HiperLAN/2 standard supports centralised architectures where the Access Point controls the repartition of radio resource between active connections with Mobile Terminals operating in the cell. However, an option has been integrate to permit direct data transfer between terminals belonging to the same cell, which avoid data frames to be relayed by the Access Point when unnecessary. Even in the direct mode, Access Point keeps its role of central controller and signaling units remains exchanged in the centralised way. However, direct mode permits the support of ad-hoc types of networks.

As depicted in Figure 12.4, the DLC layer is sub-divided into: a control plane based on the RLC (Radio Link Control) Protocol; a user plane which support Error Control schemes, a MAC (Medium Access Control) lower part providing the transport of user and control planes information.

The MAC protocol is based on a TDD/TDMA centralised scheme. The Access Point controls Medium Access by allocating time frames to active stations in order to manage and serve connections. The MAC sub-layer relies on a fixed duration frame structure that permits to concatenate different types of information: 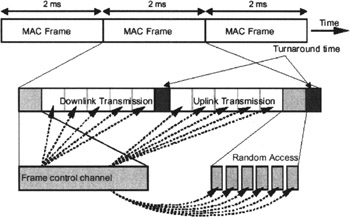 The turnaround time between Downlink and Uplink phases is fixed dynamically by the Access Point which allows very flexible resource repartition depending on the needs for asymmetric traffics. The different types of information are grouped in "transport" channels which corresponds to a standardised physical structure. Above the MAC layer, Logical channels are introduced to differentiate information types coming from the different sublayers . Logical channels are mapped onto transport channels in a specified way.

The DLC user connection control supports setting up, maintaining, renegotiating and closing DLC connections between a wireless station and an Access Point. Those procedures may be initiated by the station as well as the Access Point. To each connection is given an identifier unique in the cell. Multicast and Broadcast types of connections can also be established.

In the acknowledge mode, the error control protocol relies on a SR-ARQ (Selective Repeat Automatic Repeat Request) scheme: the sender buffers unacknowledged data packets; when it receives negative acknowledgement, it retransmits only the corrupted packets. The acknowledgment scheme, named "partial bitmap acknowledgement", is based on the sending of bitmaps from each bit corresponds to a given protocol unit and indicates whether it is positively (1) or negatively (0) acknowledged.

As introduced in section 4.1.3, during the standardisation process, IEEE 802.11a and HiperLAN/2 physical layers have been harmonised and are then similar. Each layer specificity is relying of its adaptation to the different MAC approaches, in particular the centralised channel access scheme for HiperLAN/2 and the distributed one for 802.11.

The HiperLAN/2 physical layer provides a "protocol data units train" transport service. Those "data units trains" are formed through the concatenation of transport channels broadcast to the whole terminals (generic control data for the cell and the frame, broadcast user data) or personalised (data and signaling destined to each mobile). In the uplink, the protocol units trains are provided to transport data and signaling for each mobile as well as the random channel access requests.

The PHY layer is based on a multi-carrier COFDM modulation. Each OFDM symbol contains data and pilot carriers. Then, 64 sub- carriers are used, from which 48 are reserved for data and 4 for pilots. The remaining 11 subcarriers are used as guards . Numerical values for OFDM parameters are given in Table 12.3.

The emission of a complete MAC frame (2 ms) corresponds to 500 OFDM symbols, excluding guard intervals and turnaround time between uplink and downlink transmission.

As already introduced, seven different modes are supported in order to dynamically adapt to the radio situation of each mobile terminal (interference level, distance to the Access Point ). Those modes and the correspondent parameters are given in Table 12.4.

The Bluetooth technology was developed in the Bluetooth SIG (Special Interest Group). As introduced in section 2, Bluetooth was initially specified for network applications limited in terms of capacity (1Mbit/s), range (10m) and power consumption. This result I a standard mostly destined to WPAN (Wireless Personal Area Network) types of applications than WLAN. However, in order to better position this technology in regards of Wireless Local Area Networks, we introduce hereafter the designed technologic options.

Bluetooth uses the 2,45 GHz frequency band. In order to prevent from interferences from other systems operating in the same band, a "fast" frequency hopping physical layer technology is adopted (up to 1600 hops per second). The GFSK type of modulation supports a bit rate of 1 Mbit/s. The protocol uses a temporal duplex and a centralised architecture where a "master" station shares the radio ressource use in time between "slaves" stations. The, a slave station can't take the medium as long as it receives a "polling" packet from the master. The master station and associated slaves constitute a Bluetooth network, called "piconet".

Several packets formats are defined: ACL (Asynchronous Connection Less) packets are adapted to data transfer whereas SCO (Synchronous Connection Oriented) packets support synchronous streams such as voice. Each packet can use 1, 3 or 5 time slots of 625 ¼ s each, the system changing of frequency between the emission of two packets. Figure 12.7 illustrates the resources sharing principle in "point-multipoint" between SCO and ACL packets. 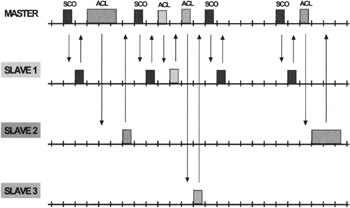 Lastly, two transmission power are supported: 100mW allowing a range of about 15 meters and 1mW limiting the range to a maximum of 5 meters . Within a piconet, up to 8 nodes can operate and maximum three voice and seven data communications can be supported.