Let's now get to grips with the Acegi Security solution. 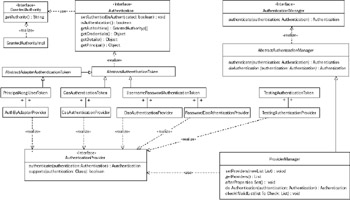 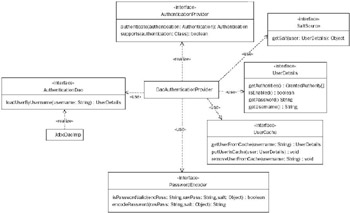 Although the preceding text explains how an authentication request is processed into a populated Authentication object, we have not covered how the user interacts with Acegi Security to actually request authentication. This is the role of various authentication mechanisms, as shown in the following table.

The authors of Acegi Security recognize that many existing web applications would ideally be modified to leverage Acegi Security's authentication, ACL, and services layer authorization services, yet these apps have an existing investment in taglibs and other web-layer code that depends on the Servlet

Although ContextHolderAwareRequestWrapper is commonly used, container adapters are of very limited usefulness in web servers given that Acegi Security provides a far more extensive and flexible implementation of security functionality than offered by the Servlet Specification. One container adapter for which use is encouraged is CasPasswordHandler, which allows an AuthenticationManager to be used by an enterprise's CAS server. At the time of this writing CAS does not provide any usable implementations of its PasswordHandler interface, so this container adapter makes deployment of CAS much easier.

All major Acegi Security classes, and many user-specific classes, need to access the currently logged on user. More specifically, they need access to the populated Authentication object that applies to the current principal. Acegi Security ensures any interested class can access the Authentication via the ContextHolder, which is a ThreadLocal object usually used to hold a SecureContext. The SecureContext provides a getter and setter for the Authentication object, as shown in Figure 10-3.

In the case of rich clients, the developer is responsible for setting up the ContextHolder for the request duration. With Spring Rich, classes supporting the use of Acegi Security are included in the org.springframework.richclient.security package. This package contains a LoginCommand and LogoutCommand, which hide ContextHolder management from developers.

For web applications and web services, a Filter is used to address the ContextHolder requirement. A series of authentication integration filters is provided with Acegi Security, as detailed in the following table.

Armed with a solid understanding of how a principal is authenticated and the resulting Authentication is stored between requests and made available through the ContextHolder, we can now examine the fundamental objective of security: authorization.

Figure 10-4 provides an overview of the key authorization interfaces and classes. An important interface is ConfigAttribute, which represents a configuration setting that applies to a secure object invocation (recall a secure object invocation is any type of object that can have its invocation intercepted and security logic applied). Configuration attributes are similar to Spring's transaction attributes, such as PROPAGATION_REQUIRED.

The AccessDecisionManager is responsible for making an authorization decision. It is passed the secure object, in case it needs access to properties of the secure object invocation (such as arguments in the case of a MethodInvocation or HttpServletRequest properties in the case of a FilterInvocation). The AccessDecisionManager is also passed the configuration attributes that apply to the secure object invocation, along with the validated Authentication object. This information is sufficient to make an authorization decision by returning void or throwing an AccessDeniedException.

The RoleVoter is the most commonly used AccessDecisionVoter with Acegi Security. It iterates through each configuration attribute, voting to grant access if one matches a GrantedAuthority held by the principal. As such it's a simple way of implementing role-based access control. BasicAclVoter is a more complex voter and is discussed in the following "Domain Object Instance Security" section.

In order to actually authorize a secure object invocation, Acegi Security needs to intercept the invocation to begin with. Figure 10-5 shows the key interfaces and classes involved in security interception. As shown, the AbstractSecurityInterceptor has a series of subclasses that each handle a specific type of secure object. 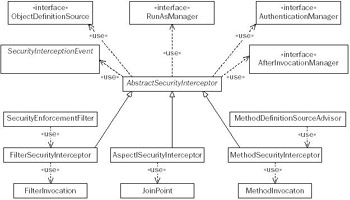 The FilterSecurityInterceptor is implemented by way of a <filter> declaration in web.xml. Acegi Security provides a useful FilterToBeanProxy class, which allows a web.xml-defined Filter to be set up in the Spring bean container. This allows collaborating beans to be easily injected. MethodSecurityInterceptor is used to protect beans defined in the bean container, requiringthe use of Spring's ProxyFactoryBean or DefaultAdvisorAutoProxyCreator along with the MethodDefinitionSourceAdvisor. The AspectJSecurityInterceptor is woven in using AspectJ's compiler.

The AfterInvocationManager is able to modify the object to be returned from the secure object invocation. This is typically used to filter Collections only to contained, authorized elements, or mutate instance variables if the information is protected. It can also throw an AccessDeniedException if, for example, the principal does not have permission to the object about to be returned.

Figure 10-6 illustrates Acegi Security's ACL services. As shown, the AclManager interface allows any Object to be presented and its ACLs obtained. An additional method is provided that allows those ACLs to be filtered to contain only ACLs that apply to the presented Authentication. The AclProviderManager polls AclProviders until one indicates it is capable of retrieving the AclEntrys applying to a given Object.

Acegi Security provides a BasicAclProvider, which uses integer bit masking and a DAO-based approach to retrieving ACL information. The implementation basically converts the domain Object into an AclObjectIdentity, which is able to uniquely identify the Object. This is then used as a key against a BasicAclDao that can retrieve the BasicAclEntrys for the Object. BasicAclProvider (shown in Figure 10-7) uses a pluggable caching layer to avoid expensive ACL retrievals. Other interfaces are also used by the BasicAclProvider to implement the remainder of the AclProvider contract. 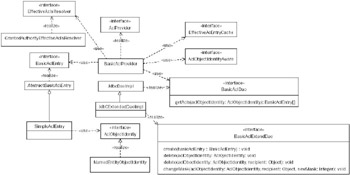 Working in concert with the AclManager are several key classes. These provide the linkage between the AbstractSecurityInterceptor and actual enforcement of ACL security. These are listed in the following table.