Previous page
Table of content
Next page
The <pre> Tag</pre>

The <pre> tag is pretty simple; just insert it like a <P> tag. Here s the first test:

It doesn t compile, of course, so I code it up, copying from the InsertParagraphTag method:

And using the requisite new definitions:

Oops, not as smart as I thought. Can you tell I was using cut and paste? That last line should read

That works just fine, and I realize that the normal insert of a tag is already after the previous line, so there s no need to do anything special about searching to the end. I decide to rename the test to InsertPre and let it go at that. Time to write a new Customer Acceptance Test. It looks like this:

That test won t run, of course, since AltP isn t defined anywhere . This reminds me of that confusion we still have between the menu or keyboard command and the real command. Also, while I was scavenging tests to copy, I didn t find a customer test for inserting a section. I think Chet and I are going to have to work on beefing up the customer tests today, both so that they test more end to end and to add the missing ones. First, though, let s make this one work. We have to add a line to the InterpretCommands method of CustomerTest:

Now this confuses me! Notice that an altS command is defined ”that means the tests must know how to do InsertSection. Maybe I just didn t see the test.

OK, good news. There is a section test, named sect1.test. Somehow I just didn t see it. I ll fix that commented line and see what happens.

Well, the test for pre failed, as did a couple of Programmer Unit Tests. I m not surprised by the programmer tests, but it appears that the pre test didn t insert anything at all. Do you see why? I accidentally capitalized AltP in the test, and the code checks for lowercase. If that happens many more times, I think we might have to beef up our testing, but for now, I ll just fix the test.

Now you remember ”and fortunately I remember as well ”that Alt+P shouldn t really work because I haven t put the AltP stuff in the GUI. That has to be done using a menu now, but no test exists to check whether it s there, so I ll fix the Form while I m thinking of it. I know we need that test but I want help to do it, and I can certainly make this work...I think. Here s the new menu code and handlers:

I gave you both those handlers so that you can see the duplication I was concerned about. I knew this was going to happen. But we ll deal with that later. The tool works; here s an image: 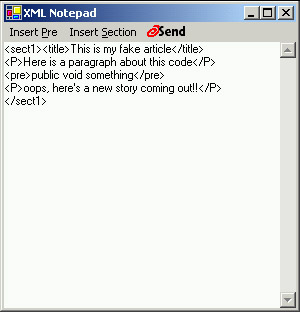