Red Hat makes it easy to upgrade a kernel. If you re willing to use the stock Red Hat packaged kernel RPM, you can install the next version of your kernel with little trouble.

While you might be used to upgrading RPMs, it s best to install the latest kernel RPM. Yes, that means you ll have two Linux kernels installed, side by side. One example is shown in Figure 12.1. RPMs on this network are mounted on the /mnt/source directory. 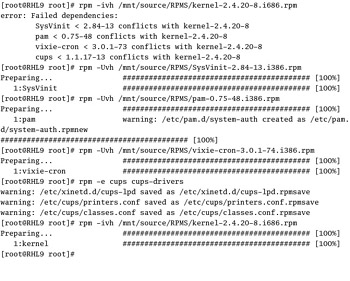 As you can see, higher kernel versions sometimes require you to upgrade and even temporarily remove other packages. Upgrades are riskier, because it s more difficult to go back. However, none of these packages are as essential to Linux as the kernel. So in the worst case, you can remove the upgraded packages and then reinstall the original RPMs.

Several Red Hat kernel-* RPMs are available, and they can be customized by CPU. Red Hat Linux kernel RPM files are organized in the following format:

Red Hat customizes kernels for the CPU types shown in Table 12.1. Red Hat may not provide the latest Linux kernel in RPM format customized for your CPU. To find your cputype , use the following command:

It s easy to install a new kernel RPM. Typical steps are illustrated in Figure 12.1. The commands that you use will likely be different. For example, if the kernel RPM filename is kernel-2.4.22.i686.rpm , located in the /mnt/source directory, just run the following command:

If you see the Failed dependencies error shown in Figure 12.1, install packages listed in your error message first. The actual packages that you may need to install or upgrade will depend on the requirements of the new kernel and what you already have installed.

When you install another kernel, you re installing several files in the /boot directory. These files are stored side by side with files associated with your old kernel. These files are summarized in Table 12.2.

And that s it! Your new kernel is automatically installed. Wasn t that easy? In the next section, you ll see what the newly installed kernel does to your bootloader.

The Red Hat Linux kernel RPMs automatically update your active bootloader, whether it be GRUB or LILO. Detailed information on each bootloader is available in Chapter 11 . A revised grub.conf file with two different kernels is shown in Figure 12.2. 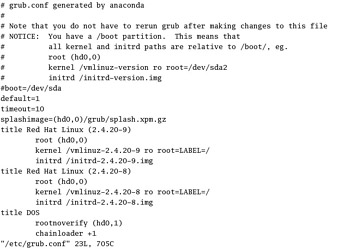 This particular grub.conf file makes it look as if you have a choice between three different operating systems:

Remember, the kernel is the core of the operating system. Thus, when you install a new kernel, you ve actually installed another version of Linux. Yet both kernels still use most of the same utilities, programs, and commands.

You may also note the default=1 command, which actually points to the second stanza as the default operating system. In other words, if you don t select a different operating system in 10 seconds ( timeout ), GRUB automatically boots your old Red Hat Linux kernel.

You can see the result in Figure 12.3, which shows the associated GRUB menu. Note that the second listing for Red Hat Linux, with the original kernel number, is highlighted. 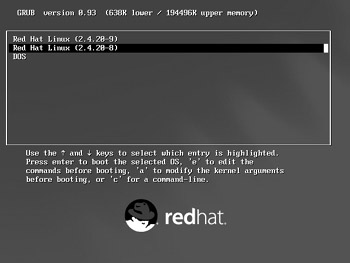