One drawback to using Red Hat kernel RPMs is that they may not incorporate the very latest features into the latest kernel. If you need the absolute latest kernel, you re probably going to have to download and process a tarball package. More information on the tar command is available in Chapter 14 ; we ll go through the process step by step here.

The Linux kernel is under constant development. As new features emerge, a loose team of volunteers headed informally by Linus Torvalds decides when new kernels are ready for test and production release. You can download their work from the kernel.org Internet sites. If you can t get to www.kernel.org or ftp.kernel.org , you can select from mirror websites all over the world, as listed in www.kernel.org/mirrors .

I ve demonstrated a download of Linux kernel 2.4.20 from zeus-pub.kernel.org in Figure 12.4. This particular package is large; at around 33MB, it might take a few hours to download on a regular telephone modem. 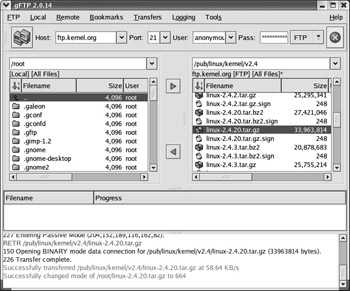 Installing and compiling a new kernel may seem like a lot of trouble, just to upgrade for the latest changes. Let s assume your computer has Linux kernel 2.4.20 installed. If you just want to incorporate the new security features available in Linux kernel 2.4.21, there is an alternative: you can install a kernel patch.

You can download kernel patches from the kernel.org Internet or mirror sites described earlier. As of this writing, they re available from the same directories as regular kernels, with a simple name: patch- x .gz .

Once you ve downloaded the patch, copy it to the /usr/src directory. Then you can upgrade your kernel with the following command:

This command reads from the compressed patch file, identifies the differences with the current Linux kernel s source code, and updates files as needed. If there are problems, they re documented in *.rej files in your kernel source directory, /usr/src/linux- x .

You can then customize, compile, and install your patched kernel as described later in this chapter.