Working with DHCP and BOOTP Clients

Naturally, you need to make sure that networking is enabled. Check your /etc/sysconfig/network file. It should include the following entry:

Now revise your network card configuration file. It s usually in the /etc/sysconfig/network-scripts directory. If the network card is eth0 , the filename is ifcfg-eth0 , and the file should contain the following:

There are two alternatives for the BOOTPROTO variable: bootp and dialup . These alternatives are almost self-explanatory; bootp assumes the DHCP server is on a remote network; dialup configures the device for a dial-up connection, such as to an ISP on the Internet.

Once the configuration files are changed, the easiest way to start your computer as a new DHCP client is with the dhclient command. The result should resemble that shown in Figure 24.13. 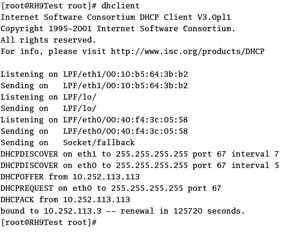