Setting up a DHCP Server

The Dynamic Host Configuration Protocol (DHCP) can automatically give all TCP/IP computers on your network the information that it needs to communicate. This includes the routers, the DNS servers, other name type servers, as well as basic IP addressing information.

To set up a computer as a DHCP server, you ll need to make sure that the network card can handle multicast requests . If you have older Microsoft Windows computers, you should also set up the broadcast address as a dedicated route. Then you can configure the DHCP configuration file, /etc/ dhcpd.conf . If you want to use your DHCP server for remote networks, you ll also have to configure dhcrelay on the router/gateway between your LANs. The dhcrelay daemon supports the BOOTP protocol. But first, let s take a look at the RPM packages that you ll need.

Not all of the RPM packages that you need for DHCP are installed by default. The required packages are listed in Table 24.4; as you might remember from Chapter 10 and earlier in this chapter, you can use the rpm -q packagename command to see if they re installed. After you confirm this, you can use the rpm -ql packagename command to see the associated files.

A Linux computer configured as a DHCP server requires multicast support on the network card and the all ones broadcast address enabled.

Now you can configure the main DHCP server configuration file, /etc/dhcpd.conf . Let s start with a sample file from the dhcp-* RPM, dhcp.conf.sample in the /usr/share/doc/dhcp- versnum directory. This sample lists a number of IP addresses, which you ll want to change to match the settings for your own network.

To learn more about DHCP servers, you may find it helpful to analyze the file in detail. The following is based on a line-by-line excerpt from the sample file. The first line allows Dynamic DNS updates to the latest available interim standard. A number of IP addresses are shown. If the applicable IP addresses for your network are different, substitute accordingly :

You may not want individual users to update their hostname or IP address entries in the DNS server, so you use this command:

Alternatively, you can use the command allow client-updates , which permits users to update their hostname or IP address entries.

The following line sets the default range of allowable IP addresses. Some of these addresses may be reserved for specific computers by later commands:

The following command is straightforward; it specifies the subnet mask, also known as the network mask, for the network:

If you configure an NIS authorization database for your network, you can specify its domain (substitute it for domain.org in this command). For more information on NIS, see Chapter 28 .

If you ve set up a DNS server on your LAN, list its address here. It can help this DHCP server find your DNS server for updates as required. You can use similar lines to identify the servers for incoming or outgoing e-mail ( option pop-server or smtp-server ), a web server ( option www-server ), or even a server dedicated to log files ( option log-server ):

The next statement helps you keep your network synchronized. The time is shown in seconds, relative to Greenwich Mean Time (GMT). In other words, U.S. Eastern Standard Time is 18000 seconds, or 5 hours, behind GMT. If you are in a different time zone, substitute accordingly.

Some computer clocks are faster than others. Computer clocks can slow down if a battery is low. If you have several computers running the same process, such as a web server, it can be important to synchronize their clocks. This is possible with a Network Time Protocol (NTP) server, which you may have configured in Chapter 19 with the redhat-config-time utility. This statement allows you to call the NTP server of your choice:

Some Linux computers are configured as part of a Microsoft Windows “based network. One of the Microsoft name services for different computers is based on NetBIOS names . This is known as the Windows Internet Naming Service (WINS):

It is possible to configure the DHCP server as a p-node computer; in other words, it looks for a WINS server and possibly a LMHOSTS file for name resolution:

You can configure a range of IP addresses that this DHCP server can assign to computers on remote networks. These addresses must fit within the range of defined network addresses.

DHCP servers assign IP addresses on a temporary basis. The first time an IP address may be renewed is the default-lease-time , in seconds:

An IP address should be renewed by the max-lease-time , in seconds:

You can assign a fixed IP address, based on the hardware address of a specific computer s network card. The next-server variable in this case refers to the alternate DNS server ( host ns ):

Once you ve customized this file for your LAN, save it as /etc/dhcpd.conf .

To run the Linux DHCP server, you need a network card that already has an IP address. If necessary, use the ifconfig command to assign an IP address, as discussed in Chapter 21 .

When you can configure a DHCP server to reserve a series of IP addresses for remote networks (see the range dynamic-bootp variable in the previous section), a DHCP server needs help. Normally, gateways or routers that sit between networks block DHCP messages. That is where you should implement the BOOTP protocol, which opens up a path through a router or gateway for DHCP communication between your LANs.

To set up BOOTP, install the dhcrelay daemon (from the dhcp-* RPM package) on the gateway or router computer. Then you can configure command options in the /etc/sysconfig/dhcrelay configuration file. For example, the following commands in that file let dhcrelay listen on both the eth0 and eth1 network cards. The DHCPSERVERS should be connected to at least one of these network cards. You can then specify any network cards connected to networks that need remote DHCP service.

Remember to start the dhcrelay script and use chkconfig to make sure that dhcrelay is active the next time you boot Linux.

Once computers on your networks start getting addressing information from your DHCP server, the results will be documented in /var/lib/dhcp/dhcpd.leases . An example of this file is shown in Figure 24.12, which displays IP address assignments to the hardware address of different network cards on your LAN. 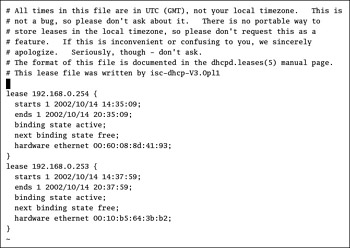