Any command or configuration file that is configured to block data from coming into your system or LAN is a firewall . Some of these commands and configuration files are covered in other chapters. The main Linux firewall tool is iptables . Various iptables commands can be connected in chains. Each of these commands can be used to block or allow data associated with specific protocols.

Many good firewalls are available based on ipchains . If you want to use one of them, you ll need to do the following:

You can then start adding ipchains rules to /etc/sysconfig/ipchains , and activate them with the service ipchains start command. Make sure that ipchains and not iptables is activated the next time you boot Linux with the appropriate chkconfig commands.

No magic iptables command is available that works for everyone. Most firewalls are based on a series of iptables commands that are connected as chains. Let s take a look at a fairly simple firewall, based on a high-security firewall created during the installation of Red Hat Linux. The entries shown in Figure 22.2 are from /etc/sysconfig/iptables , where Red Hat Linux saves firewall commands. 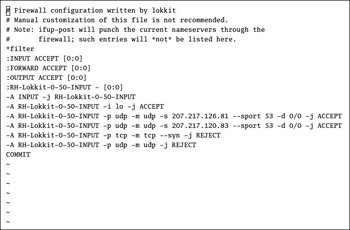 For the moment, just note that four different chains are shown in this file: INPUT , FORWARD , OUTPUT , and RH-Lokkit-0-50-INPUT . The first three chains are default chains that allow all traffic to flow through the firewall. All of the commands that follow the -A are appended to the end of the RH-Lokkit chain. In the following sections, we explain iptables commands and options in more detail.

Let s analyze the iptables command in detail. This is a rich command; entire books are available that explore the various associated options. While we describe the masquerading options later in this chapter, let s look at a few important options now. The iptables command has a very specific format:

The first option here is based on the -t table option. Two basic tables are available: filter and nat . The nat table supports the Network Address Translation associated with masquerading. The filter table allows you to block or allow specific types of network traffic. Because -t filter is the default, this option is usually not specified in a firewall configuration file.

To add a new rule, you ll generally append it to the end of one of the chains. For example, the following command appends a limit of a packet every second to the ping command to data that is forwarded through your computer, thus preventing the so-called ping of death:

To delete an existing rule, first identify the chain and the location of the rule within the chain. For example, if you want to delete the rule related to rns3.earthlink.net in Figure 22.3, note that it s the third rule in the RH-Lokkit-0-50-INPUT chain. The appropriate command is 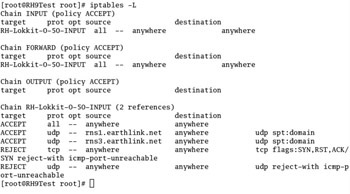 If you re a bit frustrated, you can start over. For example, if you had a series of rules in the FORWARD chain that you wanted to delete, run the following command:

This command can be a bit dangerous; if you ran the iptables -F command without specifying a chain, you would delete every rule in every chain. Basic iptables options are shown in Table 22.2.

Now it s time to examine the next step in the iptables command. Previously, you ve identified the action to take on a chain. Next, you need to specify a pattern to match in the chain. Patterns can match the IP address of the message sender or source, the TCP/IP port, and or the protocol.

Take the previous command that prevents the ping of death. For some reason, say you want to regulate the ping command solely from IP address 199.88.77.66. You could do so with the following command:

Note the use of the -s option, which prepares the way for the source IP address. You could reverse the effect and regulate the ping command from every other address, by using an exclamation point:

The exclamation point ( ! ) tells iptables to treat whatever follows as an exception. In other words, this command is applied to every computer on the Internet unless it has the noted IP address.

It helps to specify a range of IP addresses such as a LAN. The following commands combine a network IP address with a subnet mask in regular and CIDR notation. (See Chapter 21 for a description of CIDR, which is short for Classless Inter-Domain Routing.)

Some of the other switches associated with iptables are shown in Table 22.3.

The iptables command looks at every data packet that comes in, goes out, or forwards through your computer. You can tell the command to look for a specific protocol. The most common protocol patterns are based on TCP, UDP, and ICMP. The key is the -p option, which specifies the protocol. For example, the earlier command that prevents the ping of death uses the -p icmp option, since ping is associated with ICMP. (For more information on ICMP, see Chapter 20 .)

As noted in Chapter 20 , over 65,000 TCP/IP ports are available. Many of these ports are dedicated to standard services. For example, the following command stops any attempt to connect from the 199.88.77.0/24 network with TCP packets to port 21, which is associated with FTP:

Say you ve created an iptables command that looks for some pattern in the data that goes into, out of, or through your computer. But if it finds a match, you need to tell iptables what to do with that packet of data.

When iptables finds a match, the -j command tells the chain to jump to one of four conclusions: ACCEPT , DROP , REJECT , or LOG . These actions are explained in Table 22.4.

Now that we ve broken down the iptables command, you can create the firewall rules that you need. While tools such as redhat-config-firewall as described in Chapter 19 can help, GUI tools do not give you the degree of control that you may need. You need to know at least how to add and delete rules from a firewall chain.

Starting Without a Firewall

As an experiment, let s start with a computer without a firewall. This assumes that you have a LAN of two or more computers. If you have firewall rules in /etc/sysconfig/iptables that you want to save, back them up. Append the rule discussed earlier on the ping of death. Revise it so it drops any ping requests from within your LAN.

The following steps assume a LAN with an address of 192.168.0.0/24; if your LAN has a different address and network mask, substitute accordingly .

If you re in a mood for experiments, try these steps again, this time with a -j REJECT option at the end of the iptables command. Note the difference when you run the ping command from the other computer on your LAN.

Return to the high-security firewall described earlier, depicted in Figure 22.3. If you install a web server on your computer in the future, you ll want to revise your firewall a bit. The current firewall includes rules as follows:

You need to insert an iptables rule that accepts data through TCP/IP port 80. Based on the conditions described earlier:

Putting this all together, we end up with the following command:

Once you add the command, you can see the following result in the iptables chain:

If this is what you want to do, remember to save your configuration changes.

You can save configuration changes to /etc/sysconfig/iptables with the service iptables save command.

While iptables is the default for Red Hat Linux 9, it is always a good idea to check the service status of your firewall. You can do with the chkconfig command. For example, the following command should show the runlevels where Linux starts the iptables service:

If you see that the iptables service is not activated (and at the right runlevels), you can activate it. For example, the following command activates iptables the next time you start in runlevel 2, 3, or 5: