Logical Volume Management (LVM) (also known as the Logical Volume Manager) can allow you to manage active partitions. Before LVM, you had no easy way to increase or reduce the size of a partition after Linux was installed. With LVM2, you can even create read-write snapshots; but this is not part of the current exam requirements, so this book won't be addressing that feature.

Whenever you change an active PV, LV, or VG, unmount the volume first. If it's an essential filesystem such as the top-level root (/) directory, you may need to use linux rescue mode or a third-party bootable Linux such as Knoppix.

One of the critical decisions during the Installation part of the RHCE and RHCT exams is whether you install in text or graphical mode. Text mode is faster. However, if you're required to create an LVM group during your exam, you can configure custom LVM groups with Disk Druid only it if you install RHEL in graphical mode.

I can't give you a concrete time savings between graphical and text mode; it depends on the traffic demands (how many other users) and the hardware available during your exam. I can say that when I installed the standard RHEL server configuration in graphical mode, it took 5 minutes longer than the same process in text mode. If your computer has more than 256MB of RAM (and more than 16MB of video memory), I suspect the difference would decrease.

If you forget to configure LVM during installation or are required to make changes, you can use the techniques I describe in this section to configure LVM groups after installation. Remember that the Red Hat Exam Prep guide suggests that RHCEs, during the Troubleshooting and System Maintenance portion of their exams, need to know how to

You can also do much of this with the associated Logical Volume Management tool described near the end of this chapter.

The first step in creating an LVM is to start with a physical disk. If you have a freshly installed hard disk, you can set up a PV on the entire disk. For example, if that hard disk is attached as the third PATA hard disk (/dev/hdc), and you haven't configured partitions on the drive, you'd run the following command:

Alternatively, you can set up a new PV on a properly formatted partition. For example, assume that you've added a new partition, /dev/hdc2. You could then use fdisk or parted to set it to the Linux LVM partition type. In fdisk, this corresponds to partition type 8e; in parted, it corresponds to lvm. The sequence of commands would look similar to the following:

Once you have two or more PVs, you can create a volume group (VG). In the following command, substitute the name of your choice for volumegroup:

You can add more room to any VG. Assume there's an existing /dev/sda1 partition, using a Linux LVM type, and the pvcreate command has been applied to that partition. You can then add that partition to an existing VG with the following command:

However, a new VG doesn't help you unless you can mount a filesystem on it. So you need to create a logical volume (LV) for this purpose. The following command creates an LV. You can add as many chunks of disk space (a.k.a. physical extents, or PEs) as you need.

This creates a device named /dev/volumegroup/logvol. You can format this device as if it were a regular disk partition, and then mount the directory of your choice on your new logical volume.

But this isn't useful if you don't know how much space is associated with each PE. You could use trial and error, using the df command to check the size of the volume after you've mounted a directory on it. Alternatively, you can use the -L switch to set a size in MB. For example, the following command creates an LV named flex of 200MB:

But that's not the last step. You may not get full credit for your work on the exam unless the directory gets mounted on the LVM group when you reboot your Linux computer. Based on a standard RHEL /etc/fstab configuration file, one option is to add the following line to that file:

Before this line can work, you'll need to set the label for this directory with the following command:

Alternatively, you can just substitute the LVM device file such as /dev/VolGroup00/ LogVol03 for LABEL=/home/mj. The /etc/fstab file, including the meaning of the data in each these columns, is described in more detail in Chapter 4.

There are a wide variety of LVM commands related to PVs, LVs, and VGs. Generally, they are pv*, lv*, and vg* in the /usr/sbin directory. Physical volume commands include those listed in Table 8-3.

As you assign PVs to VGs to LVs, you may need commands to control and configure them. Table 8-4 includes an overview of most related volume group commands. Read the information in the table; while you may need only a few of the commands, you may find use for more in time.

As you assign PVs to VGs to LVs, you may need commands to control and configure them. Table 8-5 includes an overview of related LVM commands. Read over the table; while you may not need to use more than a few of the commands, you may find use for others in time.

Here's an example how this works. Try the vgscan command. You can verify configured volume groups (VGs) with the vgdisplay command. For example, Figure 8-9 illustrates the configuration of VG VolGroup00. 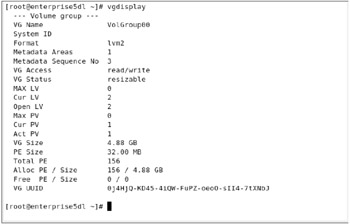 Before logical volumes are useful, you need to know how to add another LV. For example, if you've added more users, and they need more room than you have on the /home directory, you may need to add more LVs for other filesystems or resize the current /home directory LV.

Adding another LV is a straightforward process. For example, if you've just added a fourth SATA hard drive, it's known as device /dev/sdd. If you need more LVs for the /tmp directory, you'd follow these basic steps:

Removing an existing LV requires a straightforward command. The basic command is lvremove. If you've created an LV in the previous section and want to remove it, the basic steps are simple. However, it will work only from a rescue environment such as the linux rescue mode described in Chapter 16, or from a CD/DVD-based system such as Knoppix or the new Fedora Live DVD.

If you have an existing LV, you can add a newly created PV to extend the space available on your system. All it takes is appropriate use of the vgextend and lvextend commands. For example, if you want to add PEs to the VG associated with the aforementioned /home directory, you could take the following basic steps:

If this is all confusing, you might try the GUI LVM tool, as shown in Figure 8-10. In the GNOME desktop, you can start it by choosing System | Administration | Logical Volume Management, or running system-config-lvm from a GUI command line. In the spirit of the RHCE Troubleshooting and System Maintenance exam requirement, we'll use it to add, remove, and resize logical volumes. 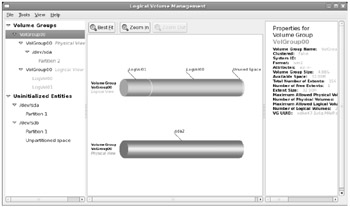 If possible, test the options in these three subsections in one sitting. I assume that the changes you make in the first subsection carry over to the next subsection.

Assume you've added a new hard drive. For the purpose of this section, I've added a second SCSI drive (can also be a SATA drive), /dev/sdb, and created a new partition of 2500MB, set or flagged to the corresponding partition type, using the fdisk utility as described earlier in this chapter. VMware is an excellent option for this purpose.

Remember that if the GUI commands in this tool don't work, you can always use the associated regular text commands described earlier. Based on the tool shown in Figure 8-10, take the following steps: 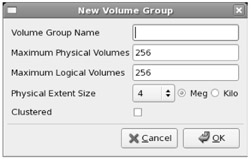 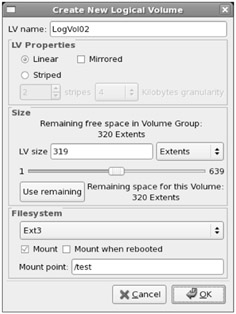 This new LV is now ready for a new filesystem; you can copy it to the /test directory, unmount it, and change /etc/fstab to mount it on the desired filesystem. But for the purpose of this chapter, don't make any of these changes.

This section assumes that you've created an LV using the steps described in the previous section. If you're removing a different LV, substitute accordingly. 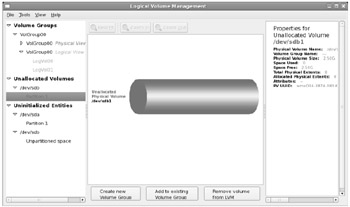 In this subsection, you'll redo the first steps in adding an LV, as described in an earlier section. If you're resizing a different LV, substitute accordingly. Instead of creating a new LV, you'll add the new space to an existing LV. To do so, take the following steps: 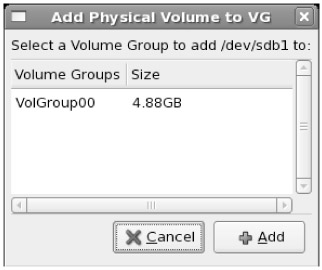 Check the result. You should see the additional space when you run the df command.

The conversion process for LVM1 partitions is straightforward; the vgconvert command is designed to help. After making sure the associated LV is backed up and unmounted, you can convert an LVM1 filesystem, which might be named VolGroup00, with the following command:

But this is a one-way process; despite what the man page might suggest, it's not possible in most cases with current tools to convert back to LVM1.