Well work through the following steps to install the Unity 2 socket server:

Downloading the trial version of Unity 2

You can download a trial version of the Unity 2 server from http:// moock .org/unity/trial/. You can also download the UClient sample applications from the same location. The trial version of Unity limits you to five users at a time. If you develop a chat application, it will disconnect after 5 minutes. In spite of these restrictions, you should be able to see how the server works using the trial version. If you want to create the chat application later in the chapter, youll need to download both the Unity 2 Multiuser Server as well as the UClient for Macromedia Flash.

Once youve downloaded the unity_2.0.1_trial.zip file (Windows) or unity_2.0.1_trial.tar.gz (Macintosh), youll need to unpack the files. You can choose any location for these files. I downloaded the Windows version and unzipped the files to the C:\ Inetpub > wwwroot foldermy web server. This created a unity folder at that location. I could have unzipped the files to any location on my hard drive.

After extracting the files, view the contents of the unity folder. Youll see several batch files and some subfolders . Youll also see the policy file policy.xml . The policy.xml file provides a cross-domain policy so that users from other domains and subdomains can access data. You can open the file to see the contents. Chapter 4 provides more information about cross-domain policy files.

If you open the file in a text or XML editor, youll see the following structure:

The file sets the server and admin ports. The default port number is 9100 . If you need to change the port number, you can do so by altering the number in the <SERVER_PORT> element.

Use the shortcut key WINDOWS-R to bring up a command prompt. The Windows key is between the Ctrl and Alt keys on your keyboard. Figure 10-1 shows the Run dialog box. Type command in the Open field and click OK . 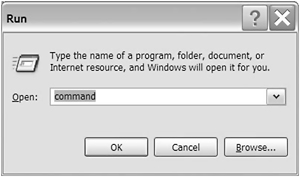 You should see a Command window open. Change to the unity directory by using the cd command. The cd command is used to change directories. In my case, I typed cd c:\Inetpub\wwwroot\Unity and pressed ENTER . The prompt will update to show the current directory.

Youll then need to type the name of the start server batch file and press ENTER . In my case, Ill use the Windows file startserver.bat . When youve finished, you should see the message shown in Figure 10-2. 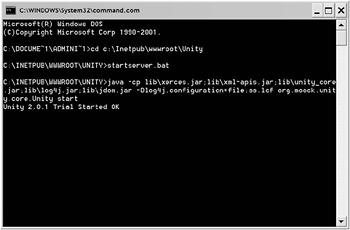 Figure 10-2: The Unity server has been started successfully.

Once youve installed and configured the socket server, youre ready to start working with the XMLSocket class in Flash.