On the S/36, you perform many configuration tasks using the CNFIGSSP procedure. When you use the S/36E, however, you need to use the Change System/36 (CHGS36) command.

The CHGS36 command can be run only when no users currently are using the S/36E because the i5 must be able to have exclusive use of it during the execution of the CHGS36 command.

The CHGS36 command presents the panel shown in Figure 21.1 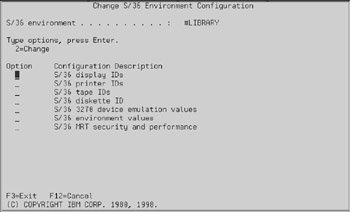 From this panel, enter an option 2 next to the item you want to maintain and press Enter. The chgs36 command takes you to a secondary panel from which you can perform the maintenance you need to do.

The first four options in the main panel (Figure 21.1) are used to maintain physical devices that are already connected and configured to the i5. Because the S/36E has different naming requirements, these requirements must be specified in the special panels presented by the S/36E.

For example, the S/36E requires all devices to have two-character names, in accordance with the S/36 naming scheme. Because OCL procedures sometimes refer to a device by name, and because the i5/OS uses device names that can have up to 10 characters, the CHGS36 command lets you assign a System/36-style alias to each device. For example, Figure 21.2 shows the panel from which you maintain display devices. 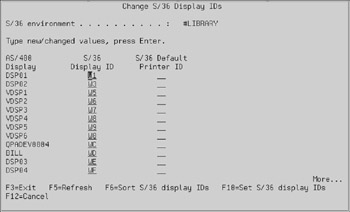 As you can see, the display SYSDSP01 has a S/36E equivalent of W2. If a user signs on to SYSDSP01 and starts the S/36E, a substitution expression such as ?WS? returns the value W2. You can change these values if you want. You can also assign a default printer ID for each display station, but this step is optional. To maintain printers, use the panel shown in Figure 21.3 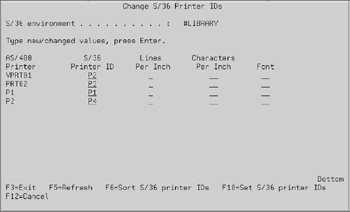 This panel is similar to the previous one, but you are maintaining printer IDs instead of display IDs. In addition, you can specify the default lines per inch, characters per inch, and font ID used by each printer.

The most important maintenance option is the one labeled S/36 environment values on the main panel. When you select it with an option 2, you get the panel seen in Figure 21.4. 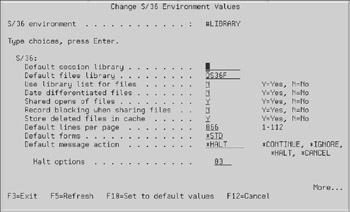 Some of the entries you may deal with are: