This command shows all data area objects contained in any user library that have names beginning with CR. Once you have the list of objects on the screen, you can select a number of options. The option you pick depends on the kind of action you want to perform. For example, you can select option 4 to delete an object shown on the list.

To delete a library, you must run the DLTLIB command. This command only requires one parameter: the name of the library you want to delete. 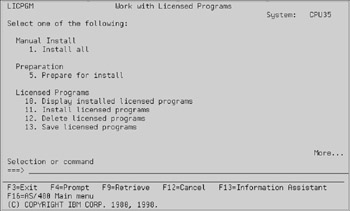 Select option 12 to delete licensed programs, as shown in Figure 19.2: 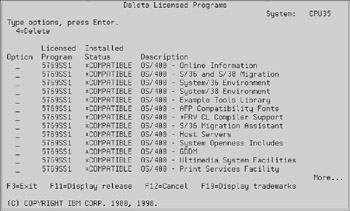 QTEMP is an ephemeral library. You can't create it or delete it using the standard CRTLIB or DLTLIB commands, but you can perform any of the other tasks related to libraries, including clearing it using the CLRLIB command.

QTEMP is the ideal place to put objects that you need on a temporary basis only. Perhaps the best example is work files that need to gather information from several other files to prepare data to print a report. Once the report is printed, the work files are no longer needed.

If you create these work files in any other library, the files remain on the system until you delete them. In this case, you might forget, or the system might not have a chance to delete them if the program aborts due to an error condition.

Rather than risking the job's continued existence (which could affect other jobs coming after it), it is much safer to create temporary objects in QTEMP and let the system delete them when the job ends. The job will end sooner or later, and the objects go with it, even if the job ends abnormally.

Creating work files in QTEMP is especially helpful when more than one user might use the same program at the same time. Because each job has its own QTEMP library, each user has his own set of work files and users do not interfere with one another.

The Submit Job (SBMJOB) command starts a brand new job and places it in a job queue. Because the job created by SBMJOB is completely separate from the original job, it has a different QTEMP library.

Therefore, you can't create objects in your interactive job's QTEMP, submit a job to batch, and expect the batch job to use the objects you placed in QTEMP. It is the wrong QTEMP. The batch job's QTEMP is empty until that job, by itself, creates objects in it.

You must create objects in permanent libraries if you need to share those objects between two or more jobs.