mof is a textual language used, like UML, to describe CIM models. It generally contains more details than the equivalent UML diagram, but is less easy for a human to read. Some tools are available to assist in the preparation of mof and I discuss these starting on page 273.

The mof language itself is defined in the Common Information Model (CIM) Specification (Document DSP0004 available from the DMTF Web site ( http://www.dmtf.org ). and I make no attempt here to describe the whole language. Instead I give a few pointers to the general syntax of the language and describe how:

The best examples of mof code are probably the DMTF's core and common models themselves ; you should download these from the DMTF Web site and study them. In general, the following rules apply to mof programs:

The Naming of Parts

It must be possible to identify any particular instance of a class uniquely. In the domestic dog example illustrated in Figure 5.3, for example, we need to distinguish Fido (the dog) and Joe (the owner). To do this, we specify that some of Fido's properties (defined on his class or one of his superclasses) have the qualifier KEY . The combination of his namespace, class name , and the values of all keys forms a unique identifier for Fido.

Assume, for example, that the Name property in the DomesticDog class is Fido's only KEY . Then Fido might be identified informally as

In each of these cases, the word "root/acne" is a namespace (presumably registered by the Acne Manufacturing Company for its components ). By the way, although this name contains a slash and a slash is often used in operating systems to represent some form of hierarchy, this namespace is not hierarchical ”it consists of one word containing the symbols r, o, o, t, /, a, c, n, and e.

The namespace is followed by the class name and then by a list of key values identifying the particular instance.

More formally , objects (either classes or instances of classes) are uniquely identified by a name known as an Object Path or Object Name. This name is effectively equivalent to a URL and has the following structure:

where the two components also have structure as follows :

The full name of a CIM_BGPCluster instance might therefore be

This is the full name (Object Path) of an instance. The same format is used to identify a class but the "key=value" clauses are naturally omitted:

I deferred discussion of weak associations until this point because you needed more background information. You are now equipped to dive into the following description.

A weak association is used to name an instance of one class in the context of an instance of another class. For example, the user cwlh may be logged on to several computers at the same time. A particular instance could always be named uniquely by including the particular computer as a property of the user, but this could mean unnecessarily duplicating a significant amount of information. Because there is likely to be an association between the user and the computer already in existence, it would be better to name the user by a combination of the user name (e.g., cwlh ) and the computer name (e.g., mercury ), provided that there is a weak association between the two.

A more realistic example of a weak association is given in Figure 5.12 where a CIM_MPLSService [8] is weakly associated with a router, modelled as a CIM_ComputerSystem. The full name of the CIM_MPLS-Service is 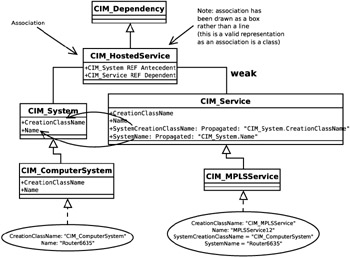 As you can see, a CIM_MPLSService has four keys, all inherited from CIM_Service:

Qualifiers give additional information about classes, associations, properties, etc. They may specify the maximum length of a string property, the maximum value of a numeric property, whether a particular property may be modified (written) or only read. The CIM specification defines many qualifiers, some of which I explain here but you can also define your own for conditions specific to your system: "this property must be an IP address."

There is some confusion about whether an instance may have qualifiers. This could mean, for instance, that whereas a string property could be defined at the class level to have a maximum length of 10 characters, a particular instance of the class could have a qualifier saying that the maximum length of the string was only 8 characters . Whether or not this is legal is somewhat ambiguous at the moment and is being resolved in the DMTF ”probably by making instance qualifiers illegal.

Some of the more important qualifiers predefined by the CIM standard include:

These are a very small selection from a wide range of predefined qualifiers. You may also specify your own qualifiers. Assume, for example, that you require a qualifier on properties which requires that the property have a genuine (non-NULL) value on Tuesdays. This could be declared in the mof as follows:

(note the en_us spelling of "flavour"). This declaration defines a new qualifier called RequiredOnTuesdays , which can take the values true and false (i.e., it is a Boolean) and defaults to the value false . It can be applied to a property (but not, for example, to a class or association) and it may not be overridden in a subclass.

Be aware that if you do create your own qualifiers, then there is the possibility that the name you choose ( RequiredOnTuesdays in this example) will clash with a name chosen in the future by the DMTF. The CIM specification includes a complete list of the current qualifier names and some names reserved for future use ”obviously, you should avoid these, but it would probably be safer if you prepended your company's registered name to any qualifier names you choose (ACNERequiredOnTuesdays).

Another important flavor of a qualifier is Translatable . Consider, for example, the definition of the qualifier Description as given in the standard mof :

This defines the qualifier Description as being a string which may be applied to any mof entity: property, class, etc. A description may also be translated into different languages, identified in the class or property definition by a pseudo-qualifier of the form Description_ll_cc where 11 is the language code (from ISO/IEC 639) and cc the country code (from ISO/IEC 3166) of the language. Consider, for example, the dog-owning hierarchy illustrated in Figure 5.3 on page 54. The description of a (male) dog owner might be

Another qualifier which has the Translatable flavor is Values: see page 66. This allows the Values associated with a value map to be written in several languages:

For more details of some of the more nonintuitive standard qualifiers, see page 189. That section covers, in particular, the OVERRIDE qualifier which can be awkward to use correctly.

Apart from the inclusion of qualifiers in square brackets, the syntax for specifying a class in mof will be familiar to any C++ programmer:

Each property has the format:

and each method has the format:

where, again, a parameter consists of a list of qualifiers in square brackets, followed by a type, followed by the parameter name. A simple property and method might therefore be coded in mof as follows (both taken from the CIM_LogicalDevice class):

In addition to being able to specify a single property, mof can also specify that a property is an array of any of the basic types ”integers, strings, Booleans, dates, and floating point numbers ”but not of references (i.e., pointers to other objects). The syntax is again very similar to C/C++: square brackets after the property name, possibly enclosing a constant which specifies the array size . Thus Figure 5.13 defines an array of uint16s called LabelStack as one of the properties of the class CIM_MPLSCrossConnect, which is a CIM_Service. Note the use of the qualifier Ordered in this definition; mof allows three types of array to be specified:

An example of a class definition, taken from the Network Common Model, is given by Figure 5.14. This defines the class CIM_BGPCluster as a subclass of CIM_CollectionOfMSEs. Notice the following points about this definition:

Syntactically, associations look much like classes (not unreasonably ”they are classes). A class becomes an association by the inclusion of the qualifier ASSOCIATION as illustrated in Figure 5.15.

The following points can be noted in this example:

In the example shown in Figure 5.15 there are only two REFs ”i.e., two objects are being associated. This is normally the case but, in principle, an association can relate any number (greater than 1) of objects.

Indications are just classes which inherit, directly or indirectly, from CIM_Indication. They have no special format.

In addition to defining classes, the mof language can be used to specify instances of classes. This feature is used for instances where, for some reason (e.g. the instance is completely static) the instance does not depend on the run-time environment; it can be specified in advance. As the mof is compiled, any providers handling the creation of instances will be invoked as if the instance had been created by an operator. The format is as follows:

For example, an instance of a CIM_BGPCluster as defined in Figure 5.14 could be specified in mof as follows:

To create an instance of an association, you must be able to specify the instances which it associates . An instance of CIM_RangesOfConfigur-ation as defined in Figure 5.15 could be coded as follows:

Note that, in this case, the Antecedent and Dependent have been set to point to other instances created earlier in the file by using the technique known as aliasing ”specifying an alias for an instance when it is specified so that it can be referenced elsewhere (forward references and even circular references are allowed). Without this technique, it would have been necessary to specify the full Object Path of the instance (see page 64 above).

SQL Tips & Techniques (Miscellaneous)
Cisco IOS in a Nutshell (In a Nutshell (OReilly))
Java How to Program (6th Edition) (How to Program (Deitel))
.NET-A Complete Development Cycle
Cultural Imperative: Global Trends in the 21st Century
VBScript in a Nutshell, 2nd Edition
flylib.com © 2008-2017.
If you may any questions please contact us: flylib@qtcs.net
Privacy policy
This website uses cookies. Click here to find out more.
Accept cookies