When a procedure or function is called, it has to allocate memory for all local variables and parameters it has. The memory for local variables and parameters is allocated from the stack, and this allocation is called stack frame creation. The stack is a segment of memory that the application uses when working with variables. The stack is automatically allocated by the application at application startup. By default, all Delphi applications allocate 16 KB and can allocate a maximum of 1 MB of memory for the stack. Although you can change these values, as shown in Figure 5-10, you shouldn't do so unless there is a very good reason. 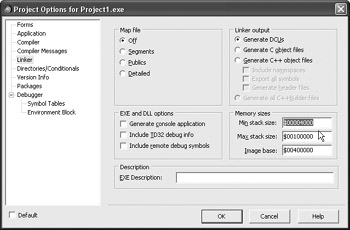 Let's take a look at what machine language instructions are generated for the very simple MyAbs function that returns an absolute value of an integer. The Delphi code of the function is displayed in Listing 5-16.

For the MyAbs call in the main block, Delphi generates the following three instructions (compiler optimizations are turned off):

The instructions generated for the MyAbs function are:

The first two instructions deal with setting up the stack frame. The third instruction, add esp,-$08, allocates 8 bytes of memory from the stack (enough space to save two integer values). The more logical instruction would be to use sub esp,$08 to allocate the space from the stack, but the developers of the Delphi compiler used a little trick here. Adding a negative value gives you the same result as subtracting a positive value, except adding executes faster. The fourth instruction moves the value of the I parameter to the stack.

The second section of the generated code performs a test to see if the value of the I parameter needs to be converted to a positive value.

If the parameter value has to be converted to a positive value, the function executes the third section of the code:

Here is the inlined version of the MyAbs function:

When the function is inlined, nothing is generated for the function. The instructions are only generated at the call site. If you turn on the compiler optimizations and inline small functions like this one, the compiler will generate first-class, extremely fast code: