In this example, you'll see just how easy it is to import Swift 3D files into Flash. In fact, even the Swift files that you'll use are pretty straightforward to construct in Swift 3D. All you need is version 2 or higher, and, of course, Flash MX.

As we mentioned earlier, we'll avoid the finer details of how this was created, as it's a little beyond the scope of this book. That said, something worth keeping in mind when creating your animation in Swift 3D is to always go back to the same point you zoomed into. This is critical so that you can get a fluid animation throughout. That probably doesn't make much sense right now, but hopefully it will very soon. In this case, you'll click on a 3D building graphic to zoom in and then click the main screen again to zoom back out to the exact same spot, no matter what building you are on (you'll see this in action very shortly).

So, assuming your Swift 3D files have already been created (and you can find ready-made sample Swift files in this chapter's example files, available for download from www.friendsofed.com , as ever), let's get started. Note that the finished version of the example is swift3D_FlashExample.fla .

Your finished Flash design is pretty flexible and could be used in many different ways: a navigation interface for a website, an attention- grabbing presentation, or whatever else you can dream up!

You've seen how easy it is to import graphics from an external 3D program, but it's important to remember that once the objects have been imported into Flash, changing or editing the 3D images becomes very complicated. The crucial point is that when you change one frame, you must change the rest. This might not be that bad on a 10-frame animation, but in our example we were working with an 80 frame animation.

However, a couple of properties that are fairly easy to edit are alpha and color values and the scaling. Changing the opacity or color is particularly easy for mouseovers, as they are not included in the animation. Take a look at the bonus example in this chapter's source file. Open swift3D_FlashExample_mouse.fla and notice the subtle yet effective mouseover animation that we've added: 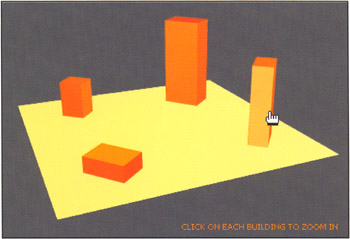