Welcome to the GNOME Desktop

As I mentioned earlier, your Fedora distribution comes with two graphical desktop environments: GNOME and KDE. Both have their own strengths and weaknesses, and, as such, both have their fans and detractors. However, as GNOME is the default environment in Fedora Core, and because I think it is much easier for new Linux users to deal with, we will focus on it almost exclusively in this book.

In case you’re wondering whether or not you’re missing out on anything by using GNOME, let me assure you that you are not. You can run any KDE application from within GNOME, and vice versa. In fact, once you have a look at the Main menu, you will see that there are many KDE applications (apps, for short) listed in the various submenus. Most apps beginning with a K are KDE apps, such as the KAtomic and KBounce games, and the KPPP Internet dialer, which I will discuss in Chapter If you followed my directions in Chapter 2, KDE is also installed on your machine, and you are free to use it on your own once you’re finished with this book.

The GNOME desktop is shown in Figure 3-2, and as you can see, it isn’t all that different from what you might be used to in a Windows environment. But don’t be completely fooled; despite the similarities, things are different enough to be interesting. There are three main elements that you will probably notice right off the bat: the desktop icons, the GNOME Panel at the bottom of the screen, and the Main menu button at the far left corner of the GNOME Panel. I will focus on these elements in this chapter. 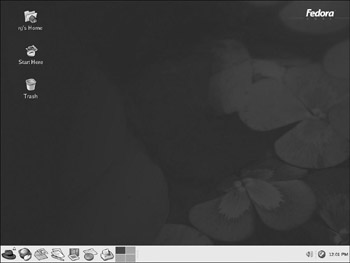