Evolution of the UNIX Operating System

Solaris is a flavor of UNIX—that is, it is one of many members of a family of operating systems called UNIX. As a Solaris system administrator, you need to understand the history of UNIX—its origin, how it evolved, and where it is now. The most important point to remember in exploring the history of UNIX is that UNIX is not an operating system that was built by one company with a wonderful marketing department.

A Brief History of UNIX

The roots of UNIX lie in Comprehensive Time Sharing System (CTSS) developed by F. Corbato at MIT in the early 1960s. Continuing along the principles of CTSS, a multiuser and multitasking system was designed under the Multiplexed Information and Computing Service (MULTICS) project started by General Electric and AT&T Bell Labs. Because the project fell behind schedule, AT&T pulled out in 1969, but the work of building a system along these lines continued, and during the early 1970s a system called Uniplexed Information and Computing Service (UNICS) was developed at Bell Labs in New Jersey. Some important events in the history of UNIX subsequent to these early developments are listed in Table 1-1.

UNIX is the oldest operating system that pioneered several OS concepts used by other operating systems such as Microsoft DOS and Microsoft Windows. Originally, Bell Labs distributed UNIX along with the source code so that, anybody could modify and customize the OS to meet specific needs. This gave rise to several flavors of UNIX, some of which are listed in Table 1-2 along with the hardware architectures they support.

Accordingly, when people say "UNIX," they are really referring to the common functionality of a family of operating systems — that is, multiple flavors of UNIX.

A high-level view of a general architecture of the UNIX OS is presented in Figure 1-2. The heart of the OS is the kernel that contains the programs to manage and control resources. It's the kernel that interfaces with the computer hardware. The users (or the applications) communicate with the kernel through a software program called the shell. The shell interprets the commands from the user for the kernel. 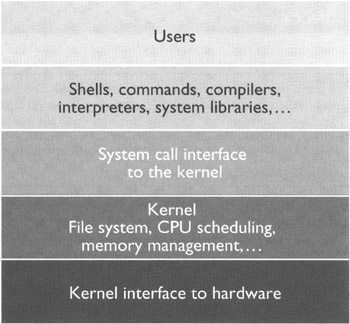 Some important characteristics of UNIX with their advantages and disadvantages are listed in Table 1-3.

These days, other operating systems such as Windows also offer support for network protocols, multiple processes, and multiple users, but UNIX has been the trail blazer in these areas. The underlying philosophy of UNIX may be outlined as follows:

This book is about Solaris which is the current name of a flavor of UNIX that became the reason for founding a company called SUN (Stanford University Network) Microsystems, and it still remains one of its two flagship product lines, the other being Java.

A Brief History of Solaris

Except for the recent rise in the popularity of Linux, no other flavor of UNIX has been as popular as Solaris from SUN Microsystems, founded in February 1982 by Bill Joy (among others), who was previously involved in the development of BSD 4.1. It was the improved version of BSD 4.1 that was released by SUN as SunOS in 1983.

In the early 1980s, AT&T saw a future in UNIX; it released System III in 1983, followed by System V. From there on, for a long time, the evolution of UNIX was for the most part carried on by the interaction between BSD and System V. In 1984, AT&T released System V release 2, followed by release 3 in 1987. In 1988, AT&T shocked the UNIX community by purchasing a percentage of Sun Microsystems. This triggered efforts for merging the distribution of BSD and System V. In 1990, AT&T released System V release 4, which was a merger of System V and BSD. So, SunOS 5.x, released in 1992, was based on System V release 4 and as a result was significantly different from SunOS 4.x, which was based entirely on BSD. At this time, AT&T once again exited the UNIX world (it was a distraction for the company from its focus on telecommunications hardware) by selling its UNIX Software Lab to Novell; Novell eventually sold its UNIX (UNIXware) to Santa Cruz Operation in 1995.

SunOS 5.x, based on System 5, was also referred to as Solaris. The rest of the Solaris releases are listed in Table 1-4.

The ability to create new flavors of UNIX offers the freedom to innovate, but it can also cause confusion and incompatibilities. So, to keep some coherence within the multiplicity of flavors, some open standards were needed.

The problems posed by variations among several flavors of UNIX motivated efforts to developing standards for UNIX. A standard called Portable Operating System Interface (POSIX) was developed by the Institute of Electrical and Electronics Engineers (IEEE) and the American National Standards Institute (ANSI). The goal of this standard is to define a standard operating system that functions as UNIX.

In fact, POSIX is a set of standards. Each standard defines a particular aspect of the standard operating system. For example, POSIX. 1 defines the standard for an application interface that the OS would provide, whereas POSIX.2 defines the command interface—that is, the shell.

In this age of the Internet (the information age), you hardly ever work on an isolated computer; instead, you work on (or interact with) a system. For example, when you send an email to your friend, you are using the largest system of connected computers on the planet, called the Internet. A system could be as small as your machine with various components, and as large as the Internet. So, it's very important that you understand the system concepts.