The most significant and, more importantly, the most balanced increase of the video adapter speed can be achieved using specialized software tools. These tools, as a rule, allow you to selectively accelerate the video chip and the video memory, the basis for the video adapter. The capabilities of software tools can be complemented by increasing the AGP bus frequency.

The PowerStrip utility is a good example of such a universal program. This program is the product of the EnTech Taiwan.

This program works under Windows 9x and Windows NT/2000/XP/Server 2003. It provides the possibility of controlling almost all monitor models, including monitors from well-known companies such as Hitachi, MAG Innovision, Mitsubishi, NEC, Nokia, Panasonic, Philips, Sony, and ViewSonic.

One major drawback of this program is its excessive number of settings, which can be misleading and confusing.

An alternative program is Nvidia's RivaTuner. This program works via manufacturer-provided video-adapter drivers (named Detonator). These drivers allow you to implement the hidden potential of the video adapter. The program supports all video adapters based on Nvidia video chips starting from Riva TNT, and ATI R200/RV250/RV280/R300/R350. The program supports all versions of Detonator drivers from Detonator 2.08 for Windows 98 SE/ME to Detonator 5.08 for Windows 2000/XP. RivaTuner allows low-level settings far below those provided by standard drivers.

An illustration of RivaTuner operation is provided in Figs. 13.4–13.8.

To fine-tune video adapter operation, it is necessary to set the Enable low level hardware overclocking checkbox. (See Fig. 13.8.) You may have to reboot the system before the new settings are effective. 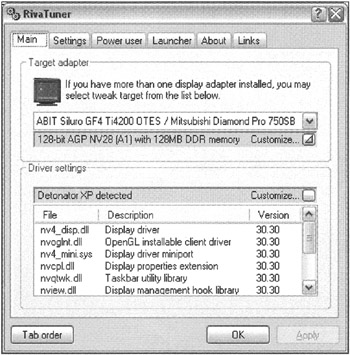 Figure 13.4: Window of the RivaTuner program 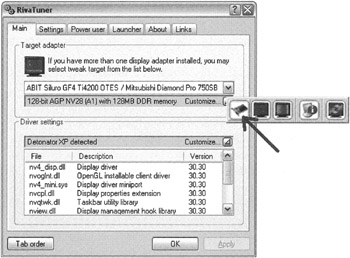 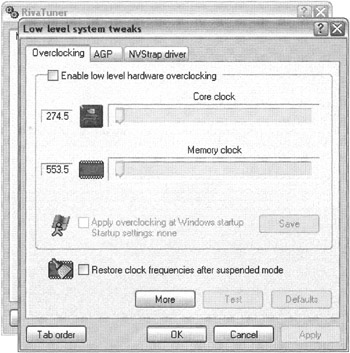 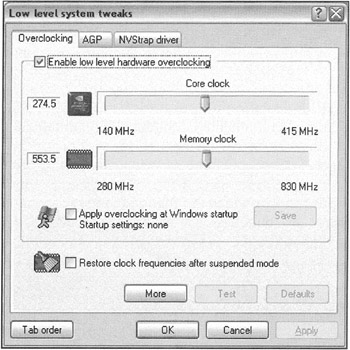 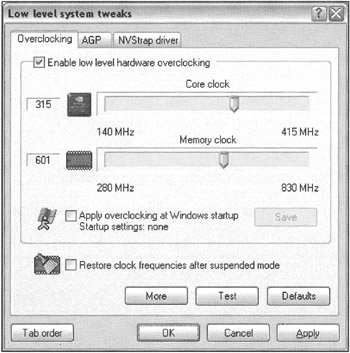 Having specified the frequencies (in this example, 315 MHz for the core, and 601 MHz for the memory), it is necessary to test the selected mode. To do so, just click the Test button. If the new parameters undergo the testing successfully, you can accept the new settings.

Note that there are other universal programs intended to support a wide range of video adapters and monitors. However, most video adapter manufacturers supply special programs with their products. Besides testing and optimizing the settings, these utilities usually provide tools for optimizing the video chipset and video memory. Such tools often can be downloaded from the manufacturer's Web site or obtained from companies specializing in the sale and support of video adapters.

Besides utilities provided by manufacturers, there are lots of shareware and freeware tools developed by overclocking fans. Many tools can be downloaded from the Internet. (Additional information on this topic, as well as the Web sites for some of these utilities, is provided in Chapter 19 of this book.)

Configuration of the Test System 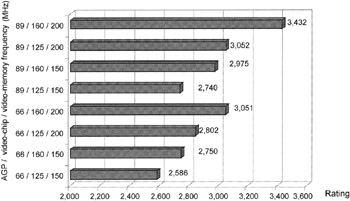 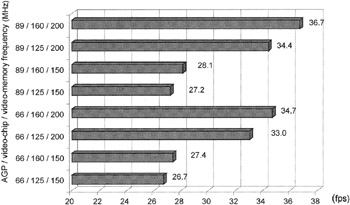 Configuration of Another Test System