Lesson 4: What Is the Security Architecture?

A database administrator can grant permission to connect to an instance of SQL Server 2000 to Windows 2000 and Windows NT 4.0 users and groups. If an attempted connection specifies Windows authentication, SQL Server 2000 uses Windows-based facilities to determine the validated network user name. SQL Server verifies the user's identity, and then permits or denies login access based on that network user name alone, without requiring a separate login name and password. This is called a trusted connection.

SQL Server authentication is required on instances of SQL Server 2000 installed on Windows Millennium Edition and Windows 98, and for connections by clients not being validated by Windows 2000 and Windows NT 4.0. 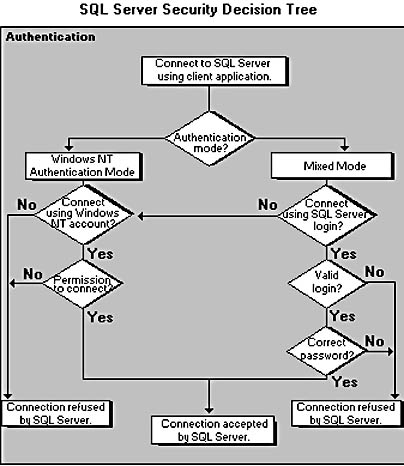 Once SQL Server 2000 authenticates a user, SQL Server 2000 determines whether that login ID has been authorized to perform any activities in any databases. A login ID by itself does not give a user permission to access objects in a database. It only allows a user to proceed to the next step, which is authorization or permission validation. This prevents a login from automatically accessing all databases on an instance of SQL Server 2000.

A database administrator uses roles to collect users into a single unit against which to set permissions. Roles are used in much the same way as Windows 2000 and Windows NT 4.0 groups. SQL Server 2000 provides fixed server roles and fixed database roles with predefined server-wide or database-specific permissions. A database administrator can also create custom user-defined database roles.

Every user in a database belongs to the public database role and has whatever permissions have been assigned to the public role, unless the user has been specifically denied certain permissions. Additional rights must be granted explicitly to the user or to a group to which the user belongs.