Besides marketing to end users, you have to stay in touch with your constituents, making sure they are aware of your casual accomplishments as well as your major business-altering successes. Keep them tuned in to your daily efforts and further cement their support of your initiative by sending them memos to share monthly or quarterly statistics showing high levels of participation, completion rates, or proof that you are meeting budget expectations. If you defined your core objectives with measurable parameters, you will find it easy to gather data to prove that you've achieved your goals. For example, our goal was to deliver 30 percent of training using technology by the end of Year One, 50 percent by Year Two, and 70 percent by Year Three. With those parameters established, it became a simple matter of collecting data and doing the math to determine whether our team was accomplishing its objectives. As of June 2002, the end of our three-year project plan for Rockwell Collins, we'd met every budget goal ahead of schedule and have converted more than 80 percent of the curriculum to computer-based modules.

Along with quarterly data on our enterprise goals, we collect budget data on our conversion efforts comparing costs of classroom training with those of technology-based courses. Every time the team converts a course we have new data, such as the chart shown in Figure 10-1, to show further cost savings to the company. 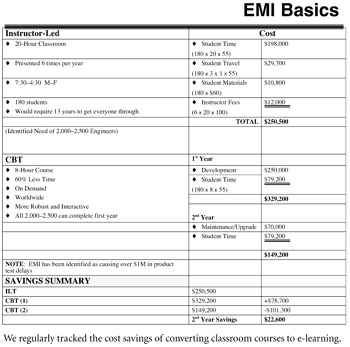 We also get monthly course-usage reports (see Figure 10-2) that detail the number of completions of our top thirty courses and chart user progress for the year. For example, as of June 2002, Rockwell Collins had a total of 38,043 users take 61,179 hours of training, and there were 32,308 course completions. Our goal for the entire year had been 21,000 users, so this report showed we were far out-achieving even our own aggressive targets. 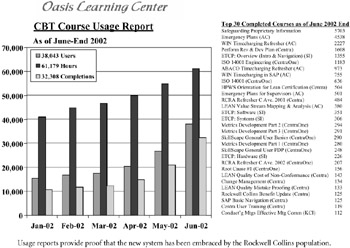