On the CD    This book is for anyone who wants to make three-dimensional (3D) games or simulations. Using the Jamagic programming language that is included on the CD-ROM accompanying this book, you can access the extremely powerful capabilities of Microsoft s DirectX (the software of choice if you are making 3D games) and be miles further ahead than if you used C++ or another programming language. So far ahead, in fact, that by the end of the book, you will have created your own working jet and ship simulators. Figures 1.1 and 1.2 show screenshots from these simulators. 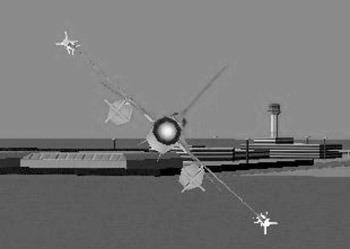 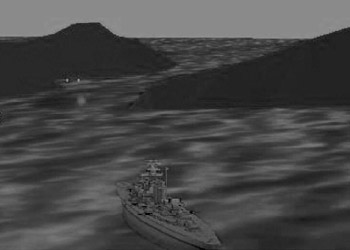 If you have never done any programming (or are not even sure what programming is), this book will show you how to program, from the ground up, using the very powerful Jamagic language. Jamagic is very similar to other languages (like C, C++, or Visual Basic) with many of the same features (like loops , conditional statements, functions, and arrays). In fact, learning how to program in Jamagic will make learning any other language much easier. The difference is that Jamagic has been exclusively designed to access DirectX easily and to make 3D games, thus greatly cutting down on the amount of programming that you will have to do.

However, do not believe that making games and simulations is easy. Programming is still a challenging endeavor that requires you to do ocean- sized thinking, much of it mathematical. In fact, quite a bit of this book is dedicated to explaining some of the mathematics involved in this type of programming. There is no need to be afraid of this ”if you are of average intelligence and are not afraid of thinking, then you should have no major problems.

What can you do with Jamagic ? Just about anything. You can make first-person shooter (FPS) or role-playing games if you wish, or you can create games very similar to anything you might find on the market today. The author prefers simulators, so this is the vehicle that will be used to teach you Jamagic.

Using Jamagic, you can easily customize your games. You can make several windows on one screen, each with a different camera showing a different view. You can easily move the camera and objects through your 3D world, and you can do so in linear motion as well as rotation. You can also make clickable buttons or clickable zones, you can move sprites (2D images) across the screen, and you can use animations. In addition, you can easily detect collisions between objects. Clickteam (the creator of Jamagic ) has done an incredible job with this software.

On the CD    In addition, Jamagic comes with some really great 3D objects: airplanes, cars , buildings , trees, ships, and spaceships. The importance of this cannot be overestimated since making good 3D artwork is one of the greatest challenges of making a good game. You can simply import these objects from the full Jamagic CD-ROM, or from the CD-ROM that accompanies this book, into your game, and then you only have to worry about the programming. This book will also teach you how to make your own 3D objects using software called MilkShape 3D , which is also included on the book s CD-ROM.

Except for the computer, everything you need to make games and simulations is included with this book. However, there are some limitations to the software that is included. First of all, the Jamagic software on the CD-ROM is a limited capability version in that you cannot save stand-alone games ”games that will run on computers that don t have Jamagic loaded. In addition, the MilkShape 3D software is time-limited, meaning that you can only use it for 30 days after you install it.

If you wish to be able to create stand-alone games, you must purchase Jamagic through the Internet at www.clickteam.com. To use MilkShape 3D beyond the 30-day limit, you may purchase it at www.swissquake.ch/chumbalum-soft/ . They are both extremely reasonably priced.

This book assumes that you have never programmed before, so if you are already a proficient programmer, you might find the pace a little slow at times. However, if you are anything like the author, who was already familiar with Visual Basic , FORTRAN , and C++ languages when introduced to Jamagic , you will find that using Jamagic is, by comparison, delightful. The author is convinced that anyone who takes the trouble to learn Jamagic will have his efforts very well rewarded.

This book is organized into 15 projects of increasing difficulty. You will learn something new with every project. You will start out slowly ”your first program will be a simple sphere that you can move around in three dimensions ”and you will build gradually to the jet and ship simulators mentioned earlier. These will be far more complicated with clickable controls, working instruments, and realistic motion through a 3D world.

For the first nine projects, you can use a computer with a 166-MHz processor, but you will need at least a 600-MHz processor by the time you get to the jet and ship simulators. Before you start, you should also make sure that you have the capability to read a CD-ROM so that you can load the software that comes with this book.

On the CD    To load Jamagic, you should insert the CD-ROM into your computer, select Browse, and double-click the file called JamagicDemo.exe. It s very straightforward ”you merely have to follow the instructions that will appear on your screen. Bear in mind that Jamagic will require about 48 megabytes of your hard drive memory, so you may want to free up some space beforehand if you are running low.

To load MilkShape 3D, double-click the file Milksetup.exe on the CD-ROM. The procedure for installing this is also very easy; just follow the instructions that appear on the screen. MilkShape will require about 11 megabytes of hard drive memory.

The next chapter introduces 3D game basics. Please read it carefully and make sure that you understand it before you actually begin programming. These efforts will be well rewarded later on because you will understand why things are done.

You will begin making your own programs in the fourth chapter of this book. There, the author will explain each line of the programs step-by-step. Though the programs in this chapter will not be difficult to understand, you must make sure that you take the time to absorb the material.

After each program is explained line-by-line , the entire program will be presented; you can type each program directly from this listing. You also have the option of running the programs directly from the CD-ROM without typing them in, but you are strongly encouraged to type them yourself. You will learn much more this way.

If you choose to load the programs from the CD-ROM or if you just want to see what all of the games are like, transfer the programs from the CD-ROM to C:/Programs Files/Jamagic/Projects (you can use Windows Explorer to do this). You will then be able to run the programs by clicking the red icon in the upper-left corner of your Jamagic screen, or by simply pressing the F5 key. Please consult Chapter 3 for more details on how to run programs in Jamagic . But remember, it is important that you transfer the programs into the correct directory, or your programs will not run. Also, keep in mind that Jamagic must be loaded on your machine before any programs will run.