The previous project was good but not much fun to use. In this project, we will make the simulation much more interesting by adding two islands, a region with shallow water in which you can run aground if you are not careful, three mines which can end the game if you hit them, a dock that you must maneuver the ship into at a controlled speed, camera controls that allow you to move the camera independently of the ship, and overhead views of various portions of the game scene. Figure 6.3 shows a screenshot of a game in progress, and Figure 6.4 gives an overhead view of the entire layout. 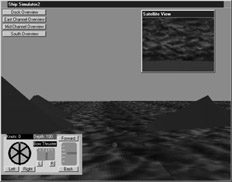 Figure 6.3: ShipSim2 screenshot. The north side of main island. 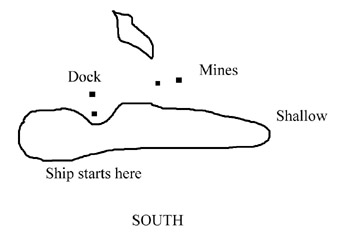 Figure 6.4: Overhead view of the game scene. The dock is on the north side of the island.

In the previous program, we used the CameraFollow command so that the camera would always keep the ship in sight. There are two problems associated with doing this. First, we cannot look around as we might wish (say for maneuvering into the dock to get a better view angle) because the camera is locked in position ”attempts to move it using one of the camera move commands are fruitless since the follow command prevents this. Second, as you may have noticed, the camera changes its orientation as the ship turns, which can give the illusion that the ship is moving in a direction that it s not. This is because we specified a distance x and z from which to follow, and when the ship turns 90 degrees (pi/2 radians!), the x and z values are interchanged with reference to the ship.

Since the ship s motion will involve a relatively large area, we need the camera to move around, so we will use the Walk command to enable us to move the camera around using the arrow keys:

But, even moving the camera around can be laborious, especially if your hands are full maneuvering into port, so we will also view the scene from above height. Before we came to this solution, we first tried having one camera view in a separate window, but in order to see the entire game scene, the height of the camera had to be so high that it made the ship invisible. We then decided to have four overhead views: a South view that showed the ship on the south side of the island where it first appears when the game begins, an East Channel view that shows the east end of the island where the shallow water is located, a Mid-Channel view that shows the mine locations and useful paths for heading to the dock on the north side of the island, and a Dock view to help you with close maneuvering at the dock.

Instead of having four separate windows , one child window is used for these overhead views, and the program user selects which of the four views to see. The following code shows the main window and child window being made, and Autorefresh being disabled:

We then make the four buttons that enable the specific camera views to be selected. Notice that functions dochange , dochange2 , and so on are called when the buttons are clicked:

Function dochange is shown in the following code, which illustrates how the camera is positioned for each overhead view:

As mentioned earlier, this simulation also features an area near the east end of the island where the water is very shallow. If the user fails to keep his eye on the depth gauge on the instrument panel, the ship will run aground. Running the ship aground will cause a sprite (named aground ) to appear on the screen informing the user that he has lost his command and promotion ”running a ship aground is not a career-building maneuver in the naval services!

The very shallow area (depth = 10 feet) is surrounded by a moderately shallow area with a depth of 20 feet. Normally, the depth in this game is 100 feet, so if the user sees the depth reduce to 20 feet, he knows he d better change course. We first identified the moderately shallow warning region as a rectangular area located at x ( xpos1 in the program) between “2000 and “3000, and z ( zpos1 in the program) between “2800 and “3800. The very shallow area is at x between “2000 and “2600 and z between “3000 and “3600. By checking the position of the ship using some if statements we can tell if the ship is in either zone. The code below tells it all:

You may be wondering how we knew the exact location of the shallow areas. This was a fairly laborious process: once the islands were imported into the previous game, a small sphere about ten units above sea level was created and moved around the islands with the Walk command, followed by the camera. At the same time, the position of the sphere (x and z coordinates) was sent to text boxes on the screen so that we could know where the sphere was at any time.

We knew we wanted the shallow area near the east end of the island (to the right side when the game first begins), so we moved the sphere around and wrote down the coordinates when it looked like a suitable location was found. This is the same procedure used to determine where to place the mines and the dock pilings on the north side of the island. It was a lot of work, but there did not seem to be any alternative since we were not sure of the size of the islands. As you might recall, they were drawn with MilkShape 3D , imported into our game, and scaled up.

Mines were placed between the two islands, on the north side of the main island, and pilings to dock against were placed on the southwest side. The pilings were made using the CreateBrick command (see the following code), which is a very useful tool for making rectangular shaped 3D objects. In the parentheses of the CreateBrick command go the x, y, and z dimensions of the brick.

We then decided that the following criteria would apply for a successful docking maneuver:

The code below describes how we determine if a proper docking was made:

This brings up a very important point: collision detection is not exact with complex objects like ships. If you try running the ship into the island, you will see that collision is not detected until the ship is about halfway into the island. In the same way, running over a mine may not be detected as a collision. For more exact collision detection, you will have to use a scheme similar to the one we just described, based on the location of the ship in relation to the mines or the island. This is not an easy task with the island because its shape is also irregular!

On the CD    You should now type in the following code. You will need to import the island (the same island, shipisle1 , is used twice to make two islands), the sprite aground the ship from the previous project, as well as the various sprites from the CD-ROM. The island is textured using the picture grass, which can be found in Jamagic/Help/Tutorials/Simple/Final Project/Pictures. This is in the same location as the water image used to texture the water surface.

Once you have run the program, keep in mind that you can adjust several things: you can move the main camera with the arrow keys and you can change overhead views with the buttons. Also, remember that when the ship is facing east, you should watch for the shallow parts near the east end of the island!

That was our last program. You should experiment with it and see if you can make any improvements. Here are some suggestions: add some additional overhead views since the ship sometimes goes out of view when it is coming around the east end of the island, place additional mines to make the game more challenging or to prevent the ship from coming from the easier west end, and place a timer on the screen to make time a factor in keeping score.