We will begin with a simple program that imports an F16 aircraft from the Jamagic CD-ROM and rotates the aircraft along the x and z axes, while displaying the amount of rotation on the toolbar. We will also display the sine and cosine of the angle of roll. The sine and cosine are super-important trigonometric functions that you really should understand fully. We will use them in the next project to make the aircraft move to one side faster the more it rolls, and to calculate the vertical speed of the aircraft when it s moving pitched up or down.

If you have never had any trigonometry and are serious about learning to program games , the following explanations of sine and cosine will be worth your time.

Let s say that we have a circle in 2D space with it s center at (0,0), as shown in Figure 5.3. So we can refer to it later, we will call this circle the unit circle . The radius of the circle (the distance from the center point to the edge of the circle) is 1. You can see on the figure that the circle crosses the x-axis at x = 1 and x = “1, and it crosses the y-axis at y = 1 and y = “1. Notice that the negative y-axis is up, while the positive y-axis is down! This is different from what you may be used to, and it goes along with the convention used for screen coordinates. Recall that the screen origin is at (0,0) and y values become greater as you go down the screen. 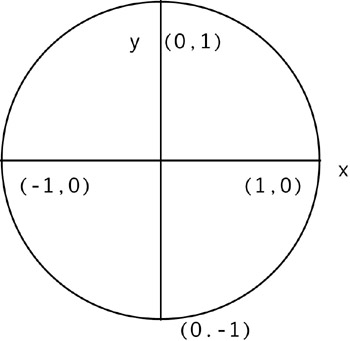 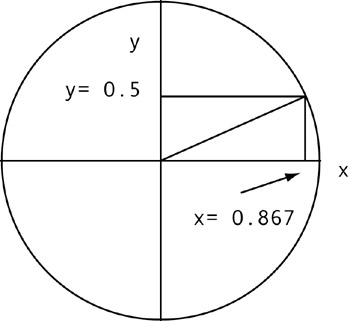 Beyond 90 degrees the patterns changes and the cosine begins increasing again (although it has a negative value after 90 degrees) as the sine decreases.

Your question right now may be, OK, this isn t so difficult, but why bother with sine and cosine? Remember that one of the features of our game will be to have the jet move faster to the side as the roll angle increases , which is a very realistic feature. We need some formula to calculate the sideways speed of the jet based on the angle, and the sine function will be extremely useful for this. Remember, the value of the sine is increasing from a value 0 at 0 degrees to a value of 1 at 90 degrees. If we take a number, say 100, and multiply it by the sine of the angle of roll, we get a pretty good pattern forming for sideways airspeed!

Basically, this is the way it works. At zero roll,

so our sideways speed is at a maximum value of 100.

Pretty good, huh? We will use this in the very next program. In this program, you should study what happens on the screen to the sine and cosine as the roll angle changes.

Figures 5.5 through 5.10 show the jet through an entire 360 degree rotation (2 pi) about the z-axis, with the aircraft seen from the front. In order to understand what we mean when we say that the aircraft is rotating about the z-axis, imagine that the jet is mounted on a shaft that runs through its length. Notice what happens to the sine and cosine.

Figure 5.5  :  Jet seen from the front in level flight. The z-axis points into the viewer. The x-axis runs horizontally. They y-axis runs vertically. Sine is 0. 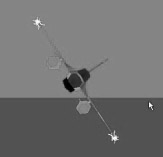 We will also pitch the jet up and down, again using radians to measure the angle. The aircraft rotates about its x-axis when it is pitching; imagine that the jet is rotating about a shaft that runs parallel to its wingspan. Figures 5.11 and 5.12 show rotation about the x-axis at pi/4 and pi/2 radians (pointing straight down). 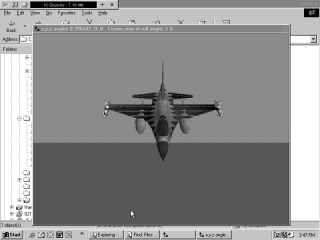 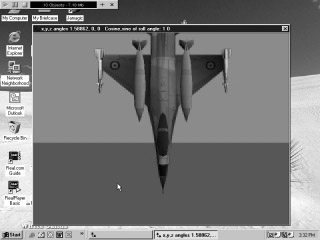 We first want to get a feel for the sine and cosine functions, so we will make a demonstration program,

FlightSimulator , that rotates the jet about different axes in pitch and roll while displaying the sine and cosine of the roll angle. In fact, the images you saw in the previous section were created using this demonstration program.

Please see the following code for an example of how we make the aircraft respond to the arrow keys; the amount of rotation in radians is first specified in the parentheses, followed by the number of seconds the motion is to last. In each case, the rotation is set to pi/16 radians (11.25 degrees). This will be changed in the next program.

We also wish to display the rotation about each axis, as well as the sine and cosine of the roll angle. We do so with the following command, which sends text to the window s toolbar area:

There is only one other new command used in this program; it is used to set a sky-colored background on the screen:

When the jet is loaded into your program, it will be loaded in facing you ”the direction it faces when loaded depends on how it was drawn. Since the camera always faces from the negative direction to the positive z direction, we will need to place our camera closer to the viewer to make sure the jet is visible.

You can now type in the code. You should understand the remaining portions from the previous chapters. When you run the program, please note how the x and z angles and sine and cosine change as you rotate the jet.

Experiment thoroughly with the program. Observe what happens to the sine and cosine values of the roll angle until you get very comfortable with what happens as the roll angle changes. Once you are ready, you may progress to the next program, which will be a working flight simulator.