We now wish to make a realistic flight simulator. First, we should take a quick look at how an aircraft rotates about its different axes and how it is controlled. Rotation about the x-axis is called pitch, about the y-axis it is called yaw, and about the z-axis it is called roll . These movements are controlled with the aircraft s rudder, elevator, and ailerons. The rudder is much like a ship s rudder, and is usually mounted on an airplane s vertical stabilizer at the rear of the plane. The elevators are similar to a rudder, except that they move up and down and are mounted on the tail; they make the aircraft pitch up and down. One set of ailerons is mounted on each wing, and they move up or down in opposition to each other to make the plane roll. Please consult Figure 5.1 and make sure you understand these movements. 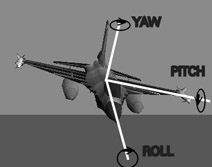 You will see that we will develop a fairly realistic simulator. Our flight simulator is to have the following characteristics:

Yes, it sounds very complicated, but we will do it in small steps. And we will have a lot of fun along the way!