The chapter would not be complete without mentioning Web usage mining. Web usage mining can be defined as "the process of applying data mining techniques to the discovery of usage patterns from Web data" (Srivastava et al., 2000). Web usage mining is used primarily to predict user behavior on the Web through the study of navigational patterns (Kosala & Blockeel, 2000). The results are not prone to biases because the data is dynamically obtained from the users (Mobasher et al., 2000). There are two main classifications of Web mining: learning a user's profile or user modeling in adaptive sites (personal) and learning user navigational patterns (impersonal)(Kosala et al., 2000). Figure 3 represents a typical hierarchy of the Web and the possible paths that the user can traverse. As indicated in the chart, the paths are sequential and include backtracks. 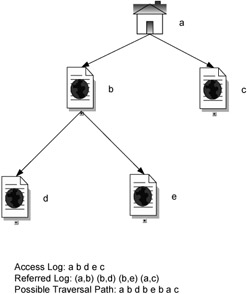 Web usage mining addresses a number of issues, including effective Web site design and management, personalization and customization. Again, Figure 3 represents atypical hierarchical structure in which the user can take several different paths. Hence, data on the navigational patterns can lead to improvements on the link topology of the Web site. The outcome would be to place links where a user would expect to find them and to design the Web site logically.

Several researchers have identified two approaches to Web usage mining (Borges & Levene, 1999; Kosala et al., 2000). The first approach maps the data into relational tables before any analysis can be performed. The second approach uses a preprocessing technique in order to mine the raw log data. However, (Srivastava et al., 2000) identifies three phases of Web usage mining: preprocessing, pattern discovery, and pattern analysis. The latter would be more appropriate for use in community-based organizations.