To use the ARS sampling method in our Gibbs sampler scheme, we need to show that

Now if we let

, then equation (17) becomes (up to proportionality) 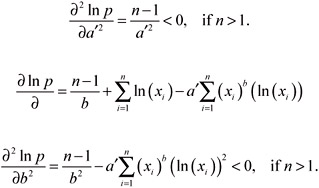 , the conditional marginal posterior densities of parameters a' and b are log-concave. Thus we can employ the ARS method in our Gibbs sampler scheme.

A major aspect of the Bayesian paradigm is prediction. The posterior predictive distribution of a future observation vector z given the data D is defined as

to find the estimate of the mode. Of course, one can use other methods such as linear interpolation to approximate the mode of the empirical distribution. However given a very large sample size value such as the sample size that we used in the following simulation studies (n = 20,000), Eq. (19) is considered to be quite adequate to locate the mode.