IDEA establishes a classification of nonexclusive kinds of domains: 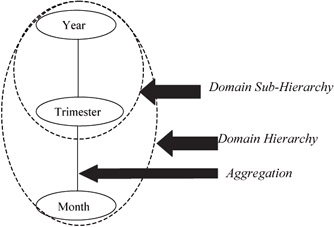 A fact schema describes a n-dimensional space related to a fact of interest for analytical processing. A fact schema consists of a set of dimensions, the dimension attributes associated to each dimension, a cell structure and, optionally, a predicate.

Figure 2 shows an example (graphical notation is based on (Golfarelli & Rizzi, 1999)) that represents sum and average of units made, sum of income and average price along time (year), country and product. 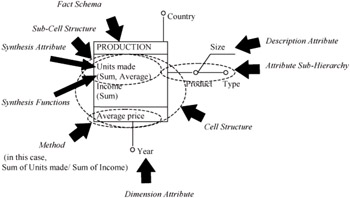 Until now, we have just described the static part of the IDEA conceptual model, that is, its structural part at intensional level. The extensional level of this model, that is, the cube, concerns to content of the n-dimensional space defined on the fact schema in a certain moment (n is the number of dimensions).

Figure 3 shows a cube of the example of Figure 2. A cell should be identified by its dimensions, and should contain values.